Stage-3
Understanding the Tissue – Kadak Bazaar
The site for the final design project of the studio was introduced at this stage. The site comprises of an existing market called ‘Kadak Bazaar’ near the main railway station area of Vadodara. The main components of the market are a vegetable market and a fruit market that attracts buyers from the people working in nearby offices, hotels and restaurants. Being right next to the railway station area, the area also has lodges, hotels, eateries, ATMs, etc. All of these together form an urban tissue that has the character of a typical bazaar, at the same time has its own problems connected with the growth of the city.
The students were devided in five groups with different responsibilities to understand the existing nature of the Kadak Bazaar tissue.
Mapping
·         Site Plan & Site sections
·         Photographic documentation
·         Site model (block)
Existing program
·         Types of shops, area, timings
·         Classification of shops in categories
o   Formal – informal (semi-permanent, vendors etc)
o   Based on products
·         Functions other than market
o   Detailed program
o   timings
Questionnaires
·         questionnaires for shop owners/hawkers
·         questionnaires for buyers etc
·         questionnaires for other functions
·         deriving patterns/conclusions
Vehicular & Pedestrian movement
·         Pedestrian networks/paths/access to and through the site
·         Four-wheelers access – Two-wheelers access – Completely pedestrian areas marked on the plan
·         Parking areas
·         Public/private transport (bus stand-auto stand)
Stats
·         What are peak hours and peak seasons?
·         Number of people entering the market during peak hours in an hour.
·         Total number of people using the market in an average day and in a peak day?
·         Most occupied shops and number of people in the shop in an hour
·         Vegetable/fruit market operation (supply hours) 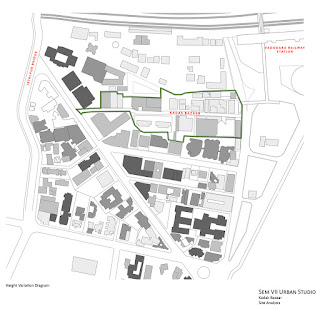 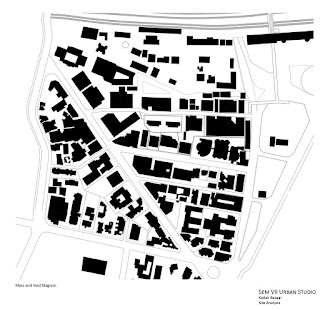 After having done the case-studies and the site-analysis, students were divided in the groups of…