Excerpt: Cruz House, designed by Rubén Muedra Estudio de Arquitectura, is a residence with a white block at various level corresponding to a specific function. This is a house whose plan was conceived with three ideas in mind:  a bifacial adaptation to the immediate surroundings both lengthwise and crosswise, the clearly defined relationship in height between the interior and exterior; and, ultimately, the use of natural illumination, whose special treatment results in zenithal lighting in the large center courtyard as well as incoming natural light through the large windows in the porches and terraces.

[Text as submitted by Architect] A former seminary and residence for the Legionnaires of Christ with a natural setting of great interest.  A residential area with low population density and where the Mediterranean forest dominates the terrain.  This is our project´s point of departure.

From the very beginning, this has been considered a new project since only one section of the original structure was maintained in the new construction which has completely remodeled all other spaces, including the exterior areas.

The house is comprised of one powerful white block with various levels, each corresponding to a specific function.  Although the large surface area of the plot ensures a vast separation between this building and its adjacent properties, each exterior side of the block also carries out a function specific to its position on the land plot.  The longitudinal sides to the north and south conserve a continuous white surface that presents a specific number of spaces contained within.  The sides facing east and west, however, remain totally open by means of large windows which are limited only by the black marble walls and the wooden cantilever.  On the eastern side, these cantilevers stretch out over the lower level porches and create the sensation of continuity by extending the interior rooms out into the exterior, where they ultimately reach the pool area.

As if in contrast to the powerful main structure, an annexed horizontal pavilion emerges.  Its exterior length delimits the pool and solarium areas, and inside, we find the barbecue area and outside washroom.

The division of spaces is determined by their function. The parking and leisure areas are in the semi-basement, the day area on the ground floor, and the night area on the first floor.  The vertical circulation areas join the three floors by means of a triple stairway reaching three altitudes and a grand central atrium with a double altitude.  The main element of this atrium is its zenith skylight that provides natural illumination to the central spaces in both altitudes of the house.  It creates a singular space that corresponds with the entrance vestibule on the ground floor and the hallway on the second floor.

The interior horizontal organization of the house is created by a series of parallel walls of black marble that cross the house from the west façade (entrance) to the east (garden-pool) and that are sporadically broken up by functional blocks (for example, the kitchen cupboards or the living room chimney) or by storage, made of walnut wood.  These walls help to delimit the interior sub-spaces like the stairway, kitchen, dining room and rooms on the ground floor; or the four bedrooms on the second floor with their respective exterior terraces.

The flooring is adapted to the use that corresponds with each of the functions:  a continuous concrete pavement in the semi-basement; ceramic flooring on the ground floor which extends to the terraces, porches, and to the pool area; and oak wood paneled flooring on the second floor.

This is a house whose plan was conceived with three ideas in mind:  a bifacial adaptation to the immediate surroundings both lengthwise and crosswise, the clearly defined relationship in height between the interior and exterior; and, ultimately, the use of natural illumination, whose special treatment results in zenithal lighting in the large center courtyard as well as incoming natural light through the large windows in the porches and terraces. 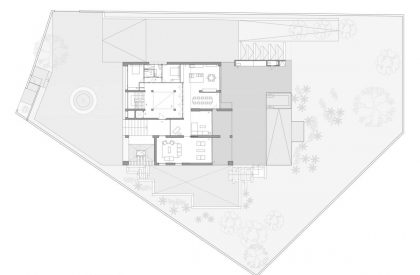 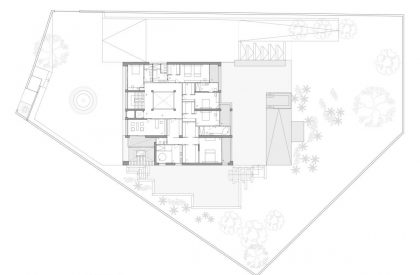 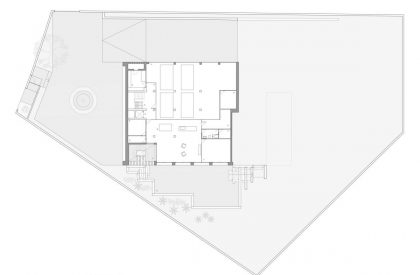 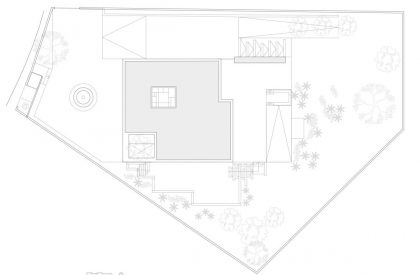 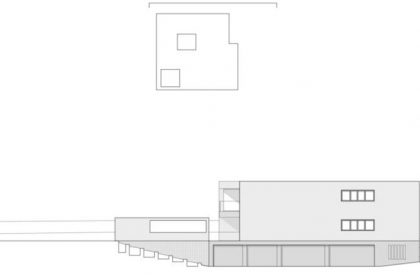 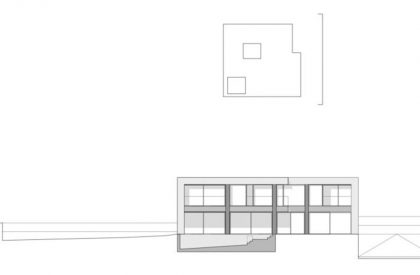 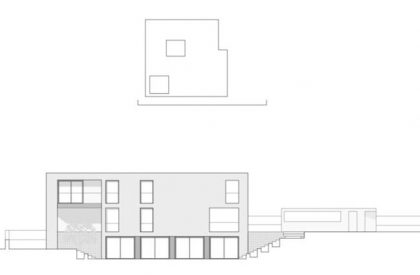 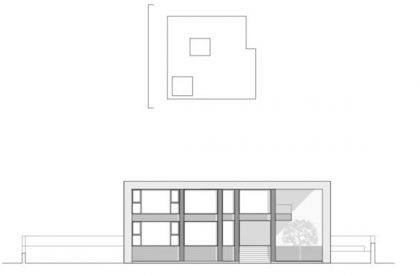 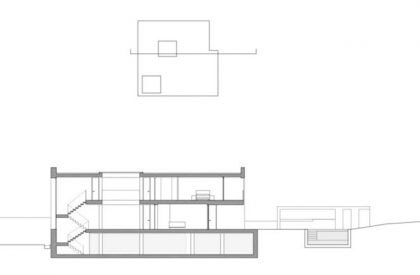 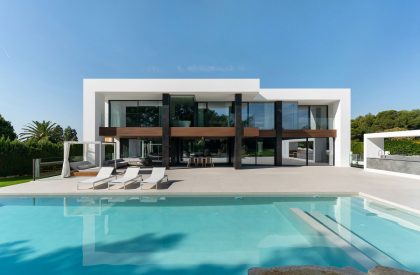 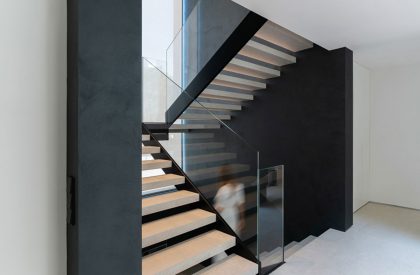 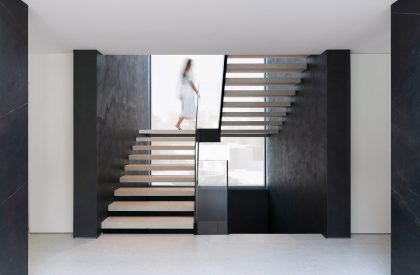 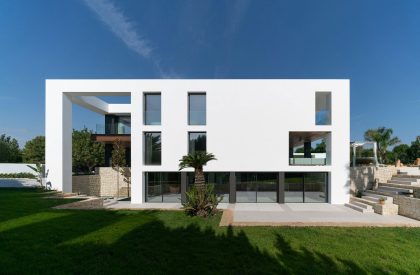 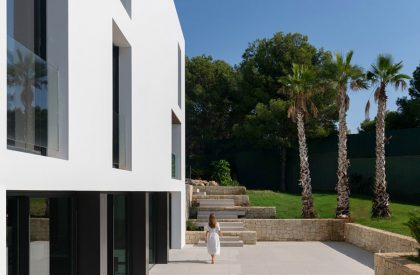 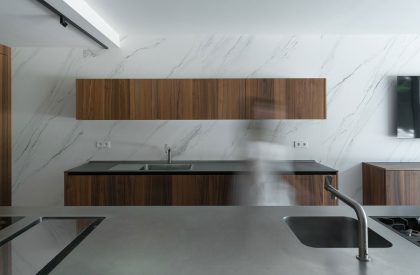 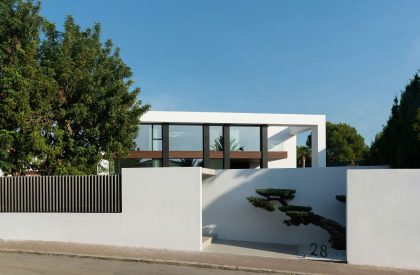 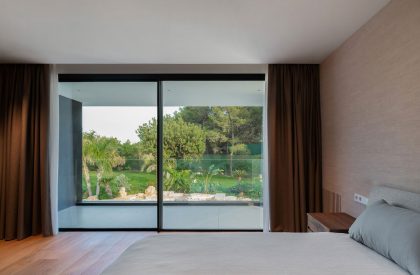 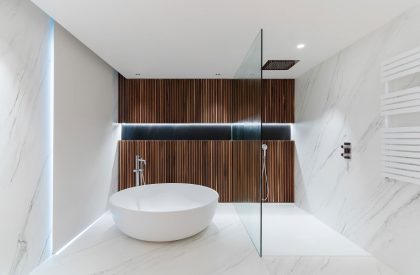 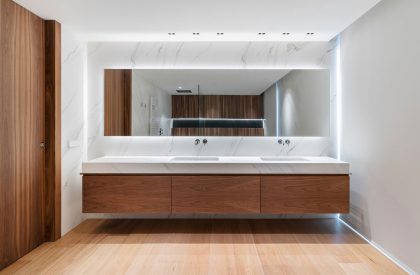 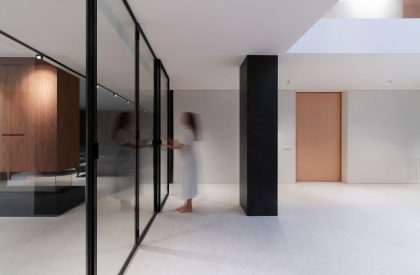 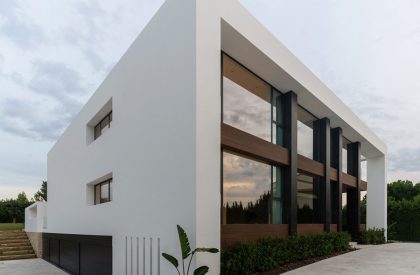 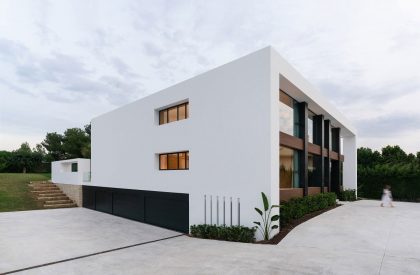 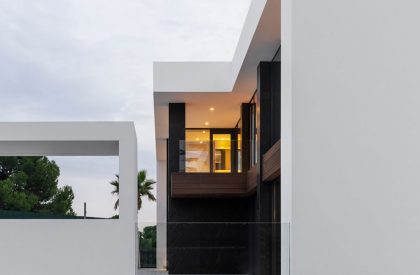 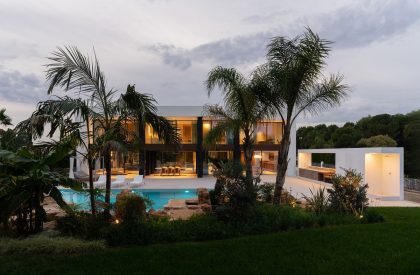 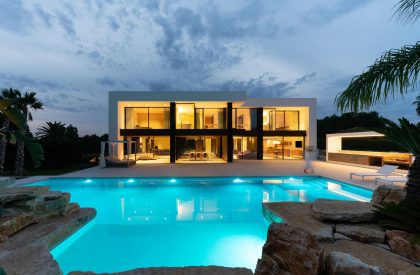 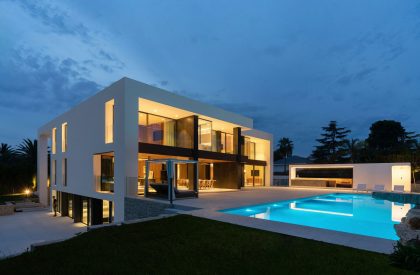