Excerpt: Cecil Street House is an architectural project designed by Chan Architecture Pty. Ltd in Australia. The brief was to create a striking, modern extension with light filled open spaces whilst reconstructing the period house at the front.

This project was a renovation and extension to a single fronted, double storey Victorian terrace house in South Melbourne. The existing house was long and narrow, and consisted of a series of dark, dilapidated rooms planned in a linear configuration. In addition, the site had numerous challenges, with limited access, 100-year-old two storey brick walls on both long boundaries and a site that sloped away to the rear.

The brief was to create a striking, modern extension with light filled open spaces whilst reconstructing the period house at the front. We started by locating all the wet areas – bathrooms and laundries in the centre of the house, with access to internal courtyards which also allowed light into the kitchen and bedrooms via a series of skylights and light shafts. This allowed the main living spaces to open up to the rear, allowing light and natural ventilation through the house.

The client also wanted to create a house that had its’ own identity and personality which viewed from the rear courtyard. So we custom-designed a laser-cut metal screening device at the rear that makes reference to the period iron lacework at the front of the house. So whilst it is made of metal and has a lace-like appearance, it also appears very light and provides varying levels of transparency. It also provides privacy to the upstairs bedrooms and creates interesting shadows through the day.

Internally, the open stairs connect the three levels up to a large roof deck, which provides additional open space for the clients to enjoy. It also provides a thermal chimney effect to minimise the need for mechanical cooling. 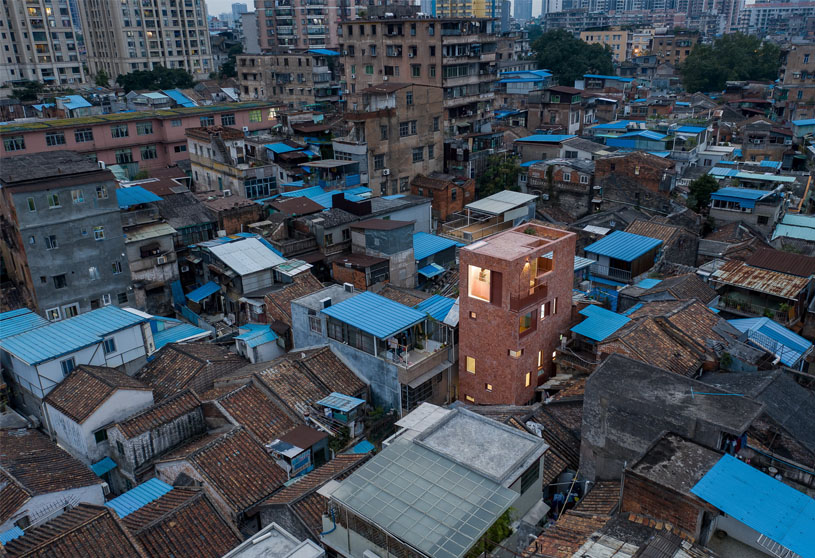