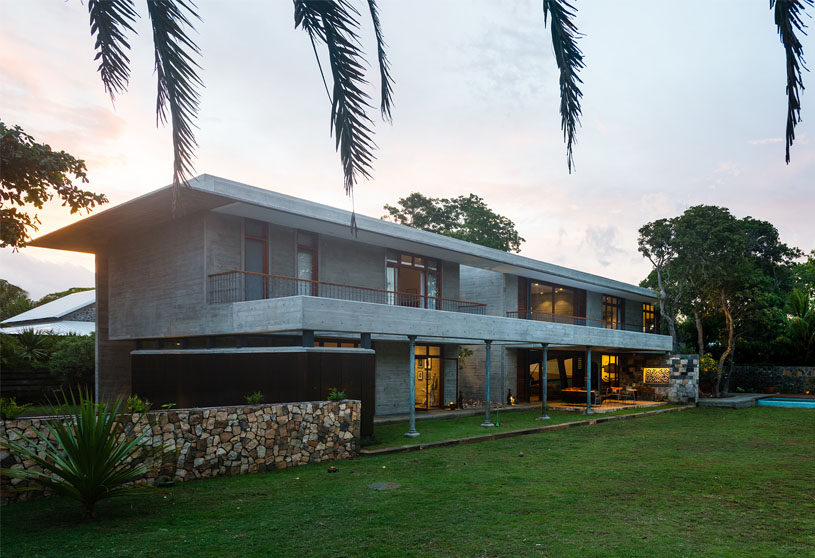 Excerpt: House in a Garden is a residential project in Goodlands, Mauritius, designed by Studio Lotus. The design intent for House In Garden is highly responsive to the connection between the residents, their lifestyles and memories, the climate of the region and the nature that surrounds the house.

[Text as submitted by the Architects] Situated at the northern tip of mainland Mauritius, Goodlands is one of the most densely populated neighbourhoods of the island nation. At the centre of Goodlands are large swathes of reserved forest lands, the fringes of which are occupied by sprawling family residences, far removed from the frenetic rush of denser developments close to the periphery. Located at the end of a residential street within these fringes, surrounded by protected land on two sides, sits the House In A Garden.

House In A Garden is home to a couple – who are avid art collectors – and their two young children, aged four and six. The house sits parallel to the south edge of the site, opening it up to the winter sun and a glimpse of the sea in the distance.

With all living spaces arranged along a central spine, the built mass of the house is characterized by timber-shuttered concrete walls folding inwards to create multiple niches and courts in the built envelope. Added on to this are layers of the owners’ collection of found antiques and artefacts from his stints of travel.

The central spine manifests itself as the internal corridor which connects all living spaces sequentially; the façade modulates itself in accordance with the function of the interior spaces – changing from a cantilevered overhang that forms the entrance forecourt, to the conservatory structure that frames the dining room from the South-East side, and leading to the kitchen on the extreme North-West which opens out to the deck and swimming pool.

A series of portals along the spine highlights the sequential nature of the living spaces, with varying degrees of privacy accorded to each zone: public spaces, for instance, open directly into the forecourt, whereas the relatively private family zone, adjoining the kitchen, has been placed towards the back of the house.

In addition to the tree in the forecourt, the Sembhal tree along the South-Western site periphery and the tree towards the North determine the spatial layout of the residence, with multiple balconies and windows opening out to glorious views of their dense canopies.

The fenestration system has been devised keeping in mind the climatic conditions of Mauritius. The larger openings have been fitted with mild steel doors specially designed to withstand the frequent cyclones that the country experiences during summers. The larger openings of the living room are glazed, framed by narrow slit windows; with fly mesh on the outside, adjustable timber louvres along the slit windows allow for cross-circulation through the house without the need to slide open the glazed windows. With summer winds typically blowing in from the North-East, this fenestration scheme allows the residents to enjoy the breeze while keeping mosquitoes out, as necessitated by the island’s tropical climate.

All bedrooms, except the guest suite, have been placed on the first floor; according to privacy to the parents and the children alike, the bedroom suites are placed on far ends of the floorplate – the parents’ suite sits above the forecourt, while the children’s bedrooms are located above the family kitchen. Both suites open into a common shared library, located on the living room mezzanine; the spatial layout, hence, allows for cross-level visual connections to be made tying the public and the private zones together. Staircases on either end of the spine connect the bedrooms to the ground floor.

Almost all the timber used in the house – from the planked false ceiling to the timber floors – is reclaimed teak; most of the basalt used on the walls is from the dismantled structure on site. The minimalist materiality provides a suitable backdrop for the clients’ extensive art collection, and for integrating reclaimed architectural elements into the home – such as the deep red spiral staircase connecting the children’s suite to the kitchen, and the South Indian columns along the entrance forecourt as well as the Rajasthani columns in the poolside verandah.

Be it the retention of vegetation on-site, the integration of manicured greens with the neighboring wilderness, or the creation of external visual foci for all internal spaces – the design intent for House In Garden is highly responsive to  the connection between the residents, their lifestyles and memories, the climate of the region and the nature that surrounds the house. 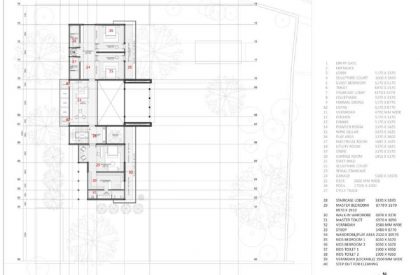 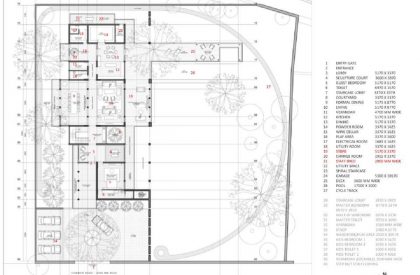 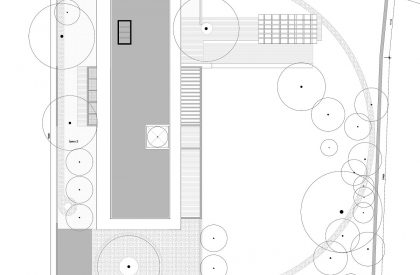 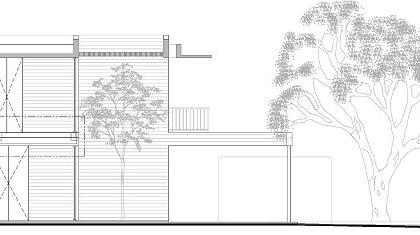 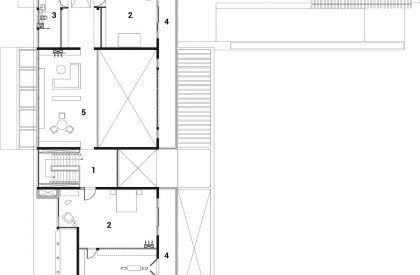 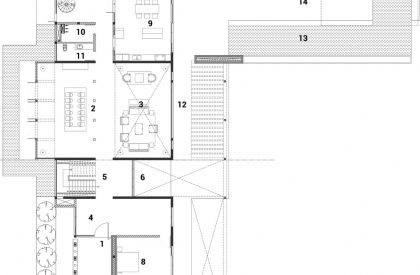 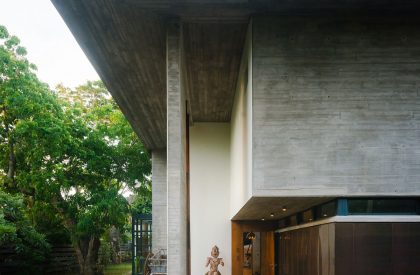 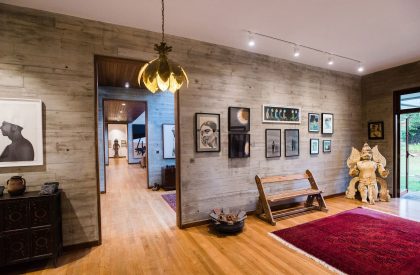 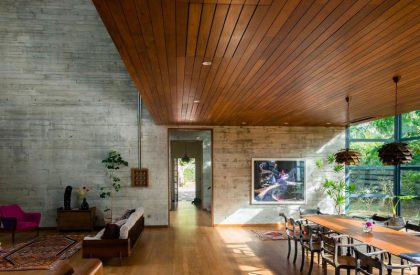 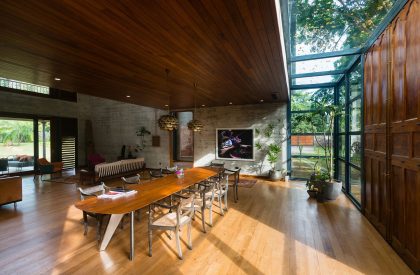 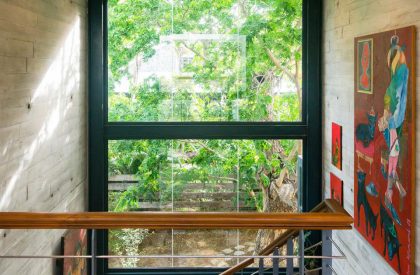 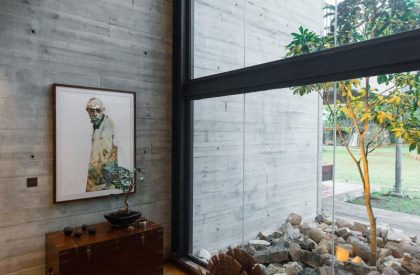 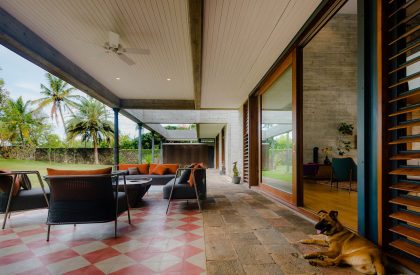 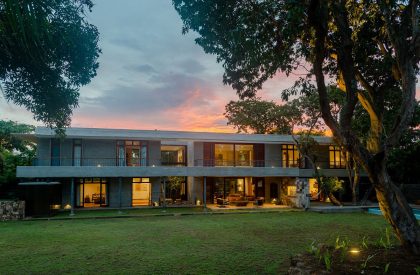 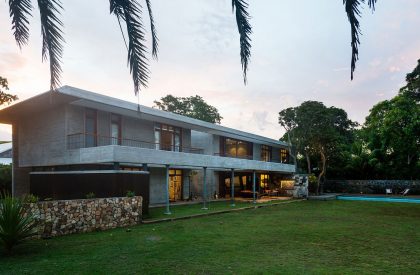 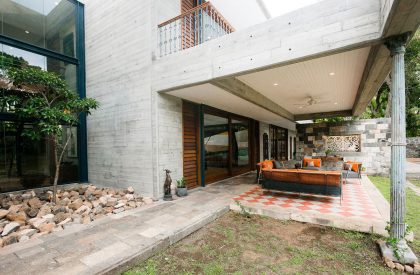 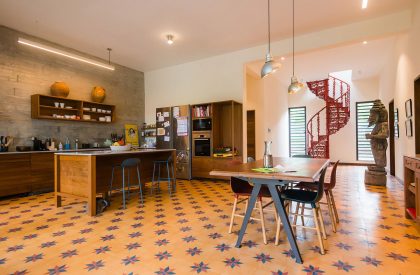 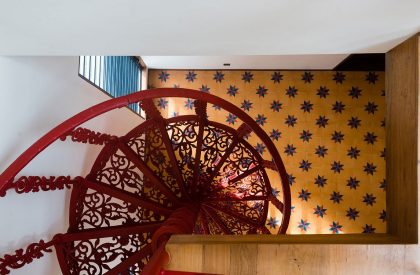 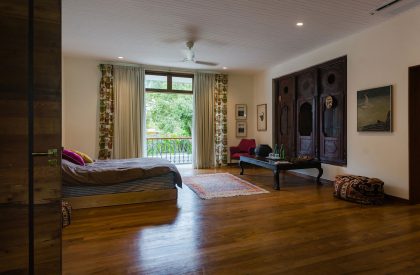 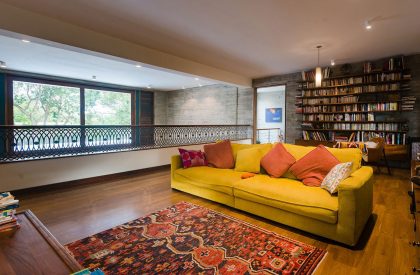 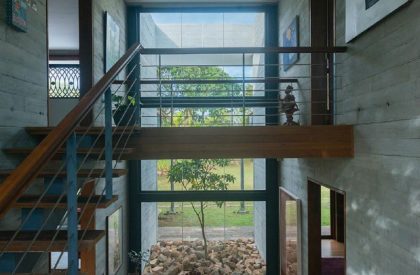 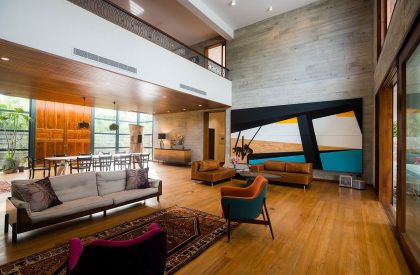 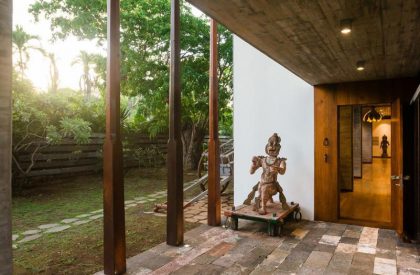 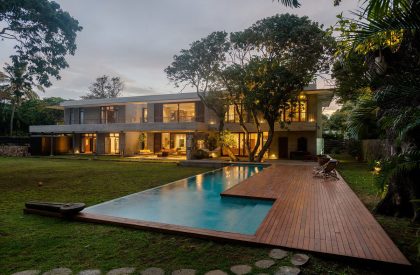