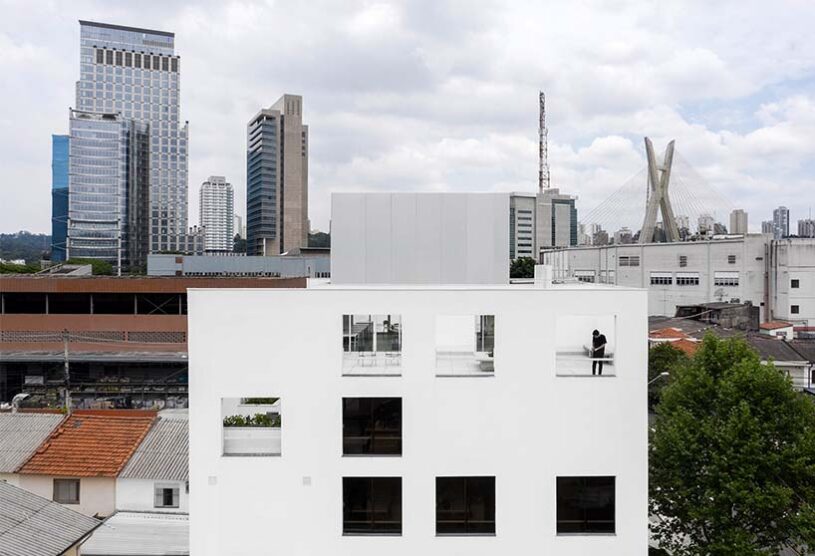 [Text as submitted by Architect] The main objective of the intervention was to transform a building in disuse of Neoclassical style built in the early 2000s into a building that aims at new occupation standards and a more contemporary and direct relationship with the city.

The privileged location of the property, as it is located on a busy corner, results in a series of benefits that can be incorporated into the new IQA headquarters. With this bias in mind, the projective strategy consists of opening the building by removing all existing walls, making the street more friendly for the residents of the neighborhood. In parallel to this, in order to solve a question of quotas between interior and exterior and also to give more prominence to the building, a generous arrival plaza was created that raised in relation to the street forms a kind of podium for the new headquarters of the Institute.

The intervention carried out on its facade, sought to rescue the building in its purest form. The ornaments were removed in order to simplify the reading of its windows; element of great potential of the property. In this sense, for greater control of luminosity linked to the importance of technical issues of vertical compartmentation, some windows were closed, in order to deconstruct the symmetry of the original facade. On the top floor, the creation of a frame follows the logic of the existing windows and reveals portions of the neighborhood’s landscape overlooking the cable-stayed bridge.

Considering that one of the biggest challenges to be solved in institutional buildings is the difficult equation of the different flows that coexist within it on a daily basis. It was necessary to establish and manage within a spatial order the different intensities, frequencies and characteristics (public, collective and private). In this case, it was necessary to completely redefine the spatiality inside the existing building to meet the new program and all the functional aspects of the company. Downstairs are public and collective order programs; the first and second floor were allocated to staff areas; the third floor houses the presidency and large meetings. Finally, the roof was transformed into a solarium to receive the leisure and decompression area.

Regarding technical requirements, easy to assemble and highly efficient materials were used throughout the project. Lining with acoustic / thermal insulation and movable partitions give the rooms flexibility and bring greater comfort to users. All of these elements are part of a light color palette, which in turn leave all environments with more expressive natural lighting. It is worth mentioning that the original structure is shown in some parts of the project, establishing the overlap between the new and the old.

To promote greater interaction between users, some decompression areas were proposed along the building in the form of gardens, which humidify and bring well-being during break times, and can also create new work dynamics or large open-air events.

Before and Construction Images