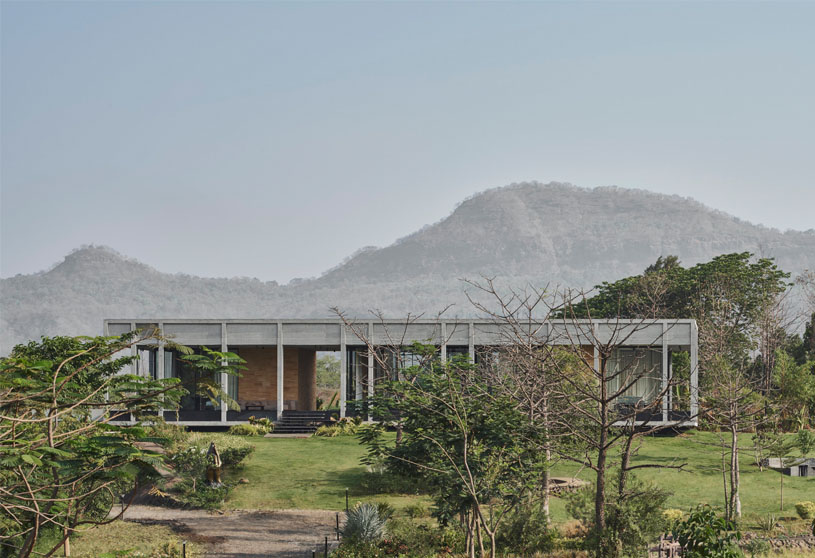 Excerpt: Mirador, a farmhouse designed by Shroffleon in the untamed wilderness of karjat is moulded as a monolithic mass of architecture as an escape from the rigour of city life. Minimalism is the protagonist of the building’s design narration. An inkling of material exploration only begins to manifest in the habitable spaces, where textures primarily dress horizontal plains in concrete and stone.

[Text as submitted by architect] Deep within the untamed wilderness of Karjat, stands a symbol of refuge on a tranquil 3.5 acres of farmland. Moulded as a monolithic mass of architecture, a building docks itself in liquid stone as an escape from the rigour of city life. The built form mimics the natural rusticity of its surroundings by standing bare against the sun to weather gracefully, as it was crafted to do so. It is in this state of solitude and ageing character that the farmhouse becomes second home to a family eagerly in search of a change in pace, far from any vestige of civilization.

In response to the pre-existing thriving farmland, the anatomy of the 2 bhk architecture choreographs itself respectfully to blend in rather than to stand out. Its insatiable appetite to be one with nature nudges the structure to drop anchor at the highest point within the farmscape, and with good reason.

To frame and capture as much of the sceneries as possible, from where they are most plentifully served. If it is not the hills in the distance, it is the cascading waterfall nearby; or sometimes the fruits of mango tree plantations, paddy fields and vegetable patches seem more attractive to seize.

Details of construction materials: An exterior concrete shell frames these vantages, comprising structural slabs and columns. Beyond this shell lies the heart of the edifice that is safeguarded, protecting life as it may play out for the household. A peripheral veil of glass facades and columns are the only elements that come between man and nature. A portico sandwiched in between glass and column creates an idyllic cue for man to try and engage with nature. By pitching an infinity pool along the portico edge, this cue only strengthens.

Special features: The slow pace of farm life dawns through the glass facades as the sun’s rays generously pierce into the central living-dining core at rise and set, giving it a dynamic energy of life. Instilling a town square-like vibe, this communal space serves as a perfect spot for social gatherings. Away from the communal, privacy awaits at the East and West wings flanked on either side. Each wing accommodates a bed & bath suite and idyllically feels part of the landscape as its glass walls dissolve into the sceneries.

Minimalism is the protagonist of the building’s design narration. An inkling of material exploration only begins to manifest at the habitable spaces, where textures primarily dress horizontal plains in concrete and stone.

A larger bulk of vertical surfaces comprises glass screens that choose to render themselves with the all-encompassing sceneries that become part of the interior decor. A hint of opaque verticals breaks the transparency of the built, in an accented tone of natural stone walls.

The floating edifice, retires by night only to the whistle of crickets and the sonic backdrop of the Ulhas River nearby, perfectly defeating the visceral distractions and strictures of city life. 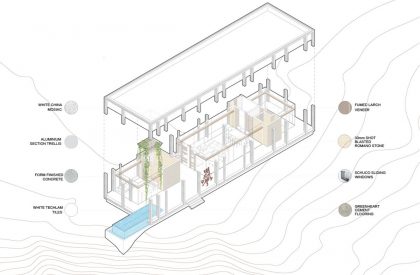 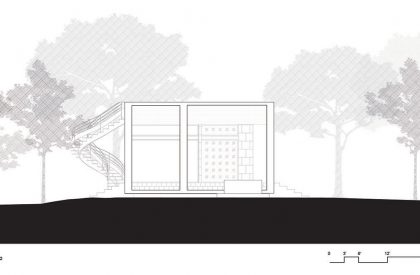 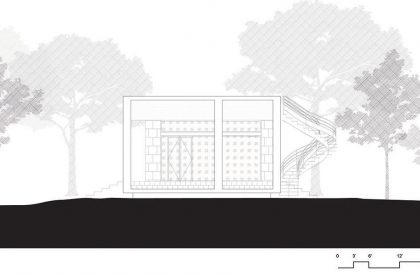 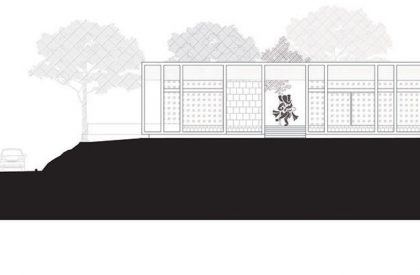 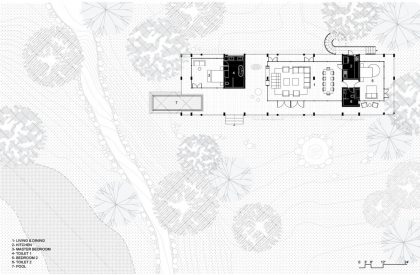 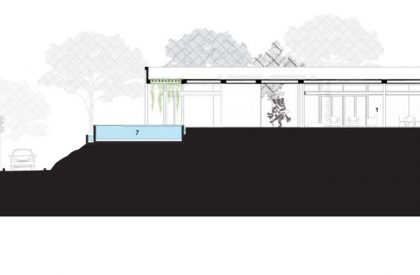 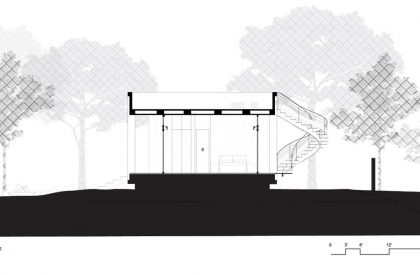 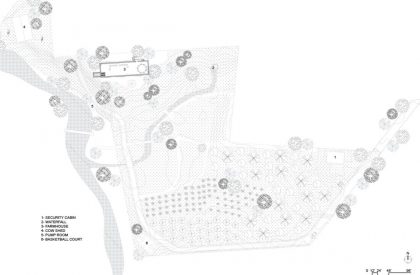 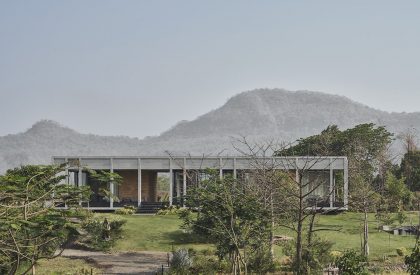 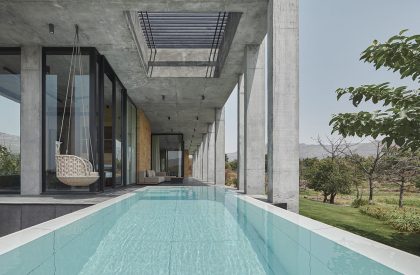 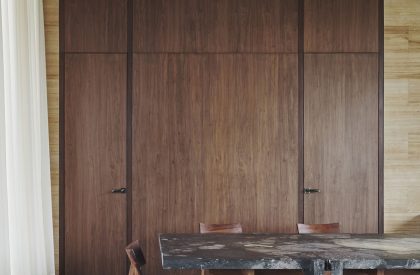 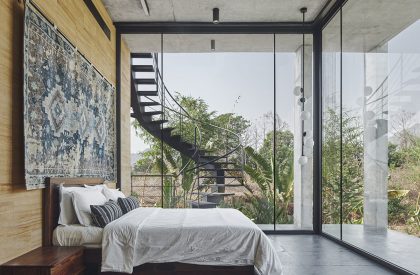 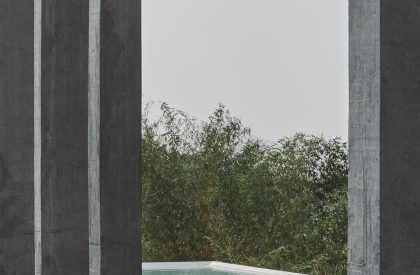 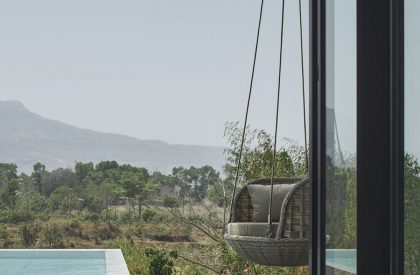 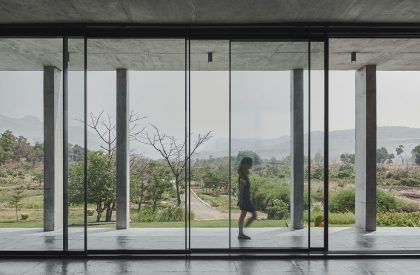 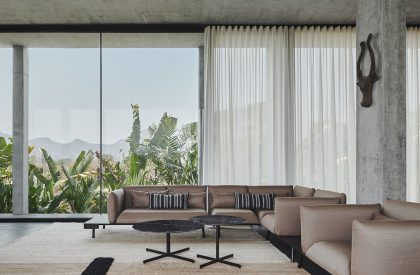 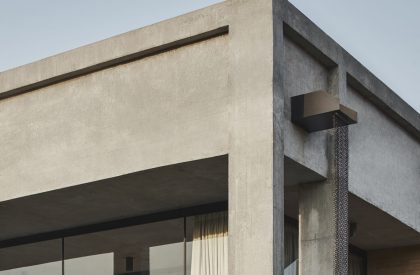 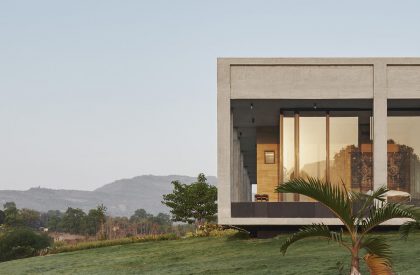 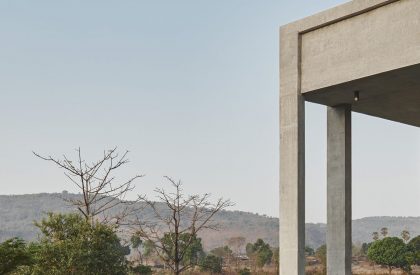 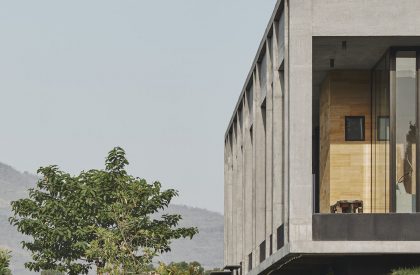 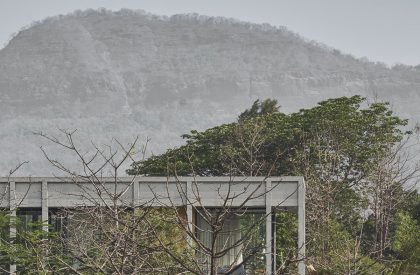