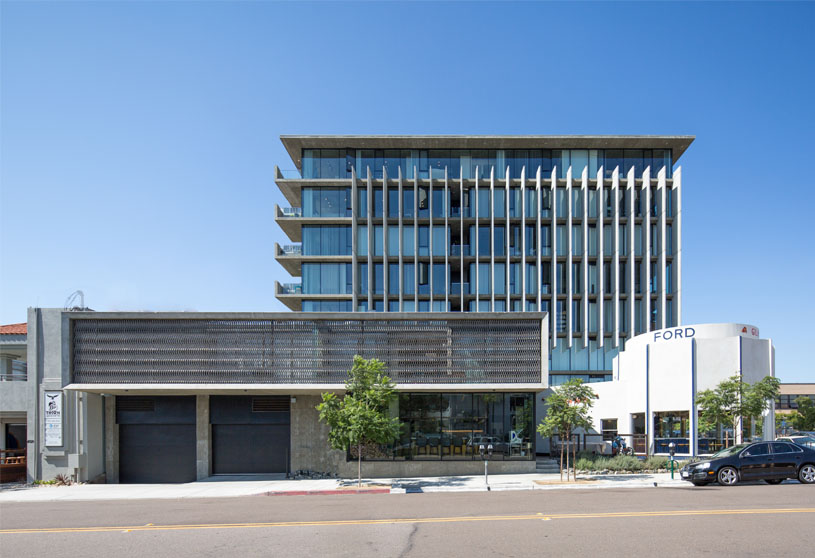 Excerpt: The Fort is an architectural project designed by Jonathan Segal FAIA in San Diego. The building has been broken down into 3 formal elements. The original Ford Dealership, the lower 2-story long horizontally screened structure and the upper vertical finned tower.

[Text as submitted by architect] The Fort, located in the historic district of Mission Hills San Diego, is a study in the integration of a small historical building with a new eight-story, mixed-use apartment building. The small dilapidated 1920’s art deco Ford Dealership and filling station previously existed in the middle of the site. Unfortunately, over the life of the structure, poor maintenance led to the original stucco and window being damaged beyond repair. In coordination with the community, Save Our Heritage Foundation and the City of San Diego Historical Resources Board, an exact recreation of the building was integrated into the new project. Instead of simply saving the façade of the previous building, the round building stands alone as the focal point for the project.

The building has been broken down into 3 formal elements. The original Ford Dealership, the lower 2-story long horizontally screened structure and the upper vertical finned tower.  These structures include a total of 23 apartments, three of which are very low income paid for entirely without subsidy, six live-work studios and a restaurant space which uses both the round Ford dealer and the ground floor of the new structure. To pay homage to the historical importance of the automobile and previous site context, the building utilizes symbolic screening and fins similar to automobile grilles.

The lower two-story element has a screen providing privacy for the two unit’s patios by a local sculptural artist; the upper mass is lined with cast-in-place vertical fins both mimicking grills of the 20’s and 30s. These east facing fins also reflect sunlight during the early morning which reduces heat gain and provides balanced natural lighting throughout the day contributing to the building’s highly efficient energy use.

All core power is provided by the large rooftop solar array and the hallways are all naturally ventilated. All units have cross ventilation and low VOC paints, energy efficient LED lighting, energy efficient appliances, and water saving fixtures. The building exceeded California’s efficiency requirements by more than 5%. The upper garage is naturally day lit and both upper and lower levels share a large opening to above to provide natural ventilation.

All stormwater on site is filtered through two large planting areas with drought tolerant plants requiring minimal watering. The concrete surfaces of the building are left exposed so environmentally damaging chemicals, paints, and sealant usage is entirely mitigated. 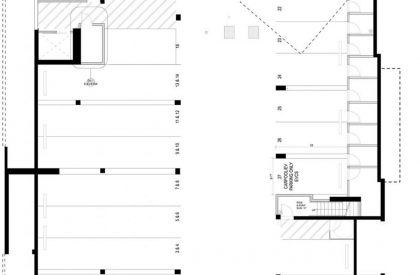 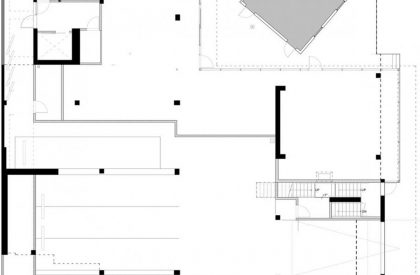 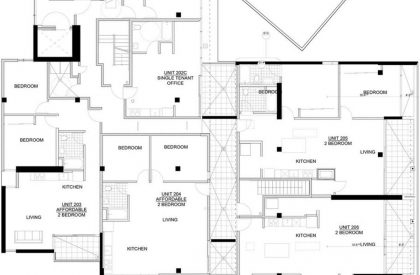 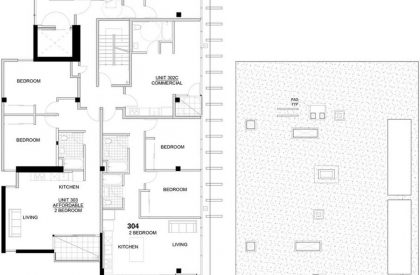 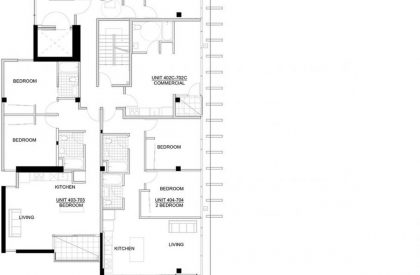 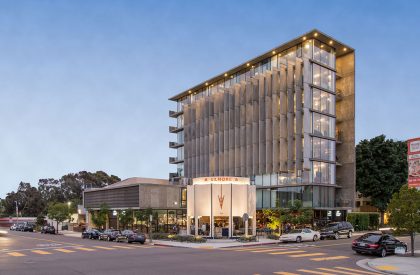 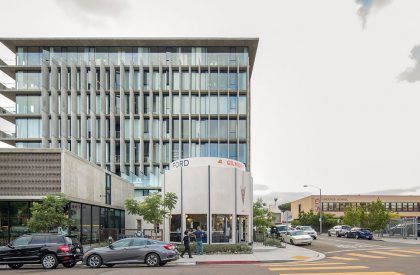 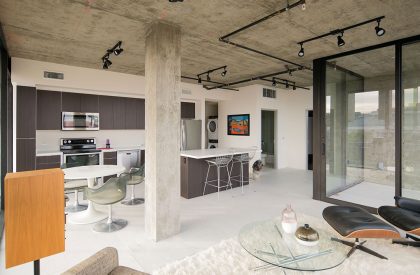 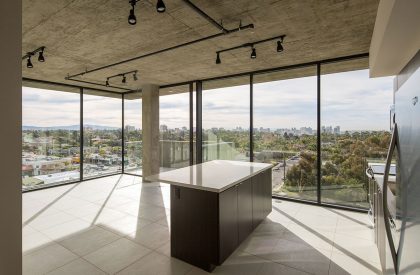 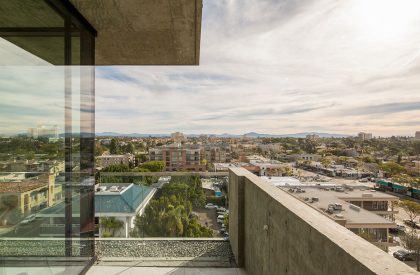 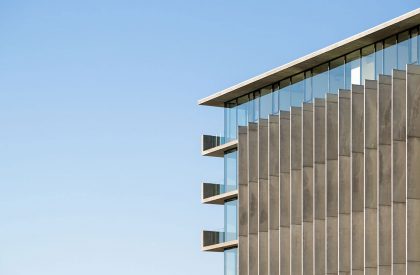 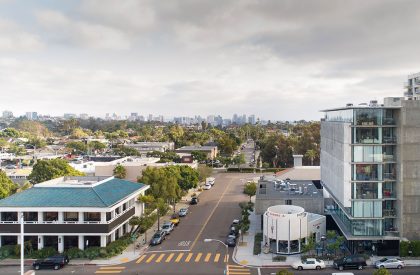 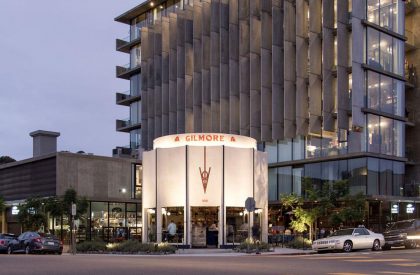 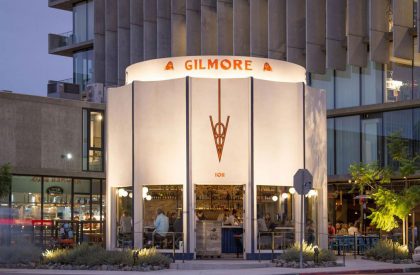 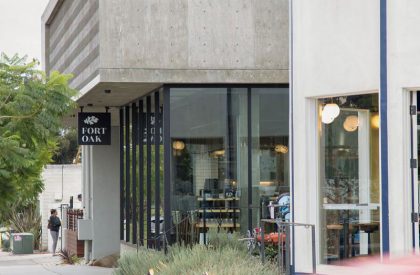 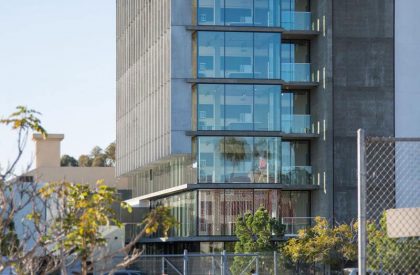 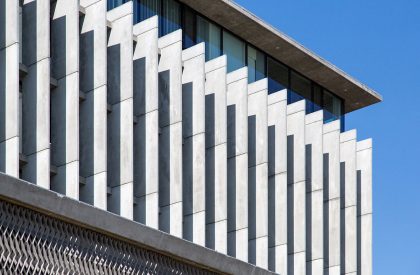 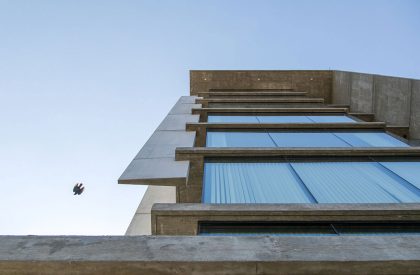 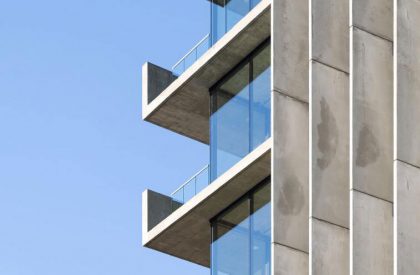 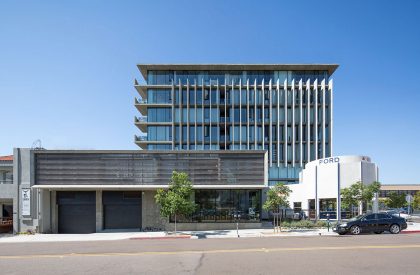 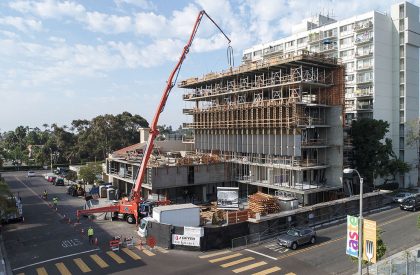 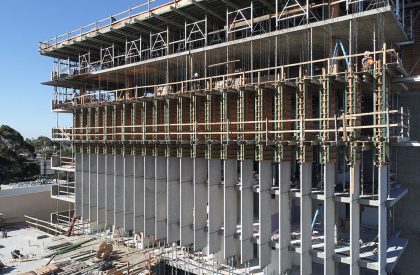 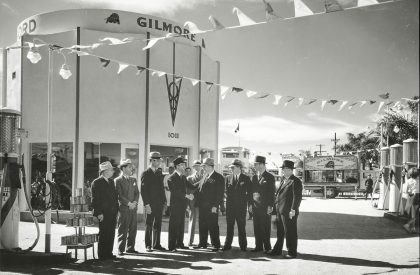 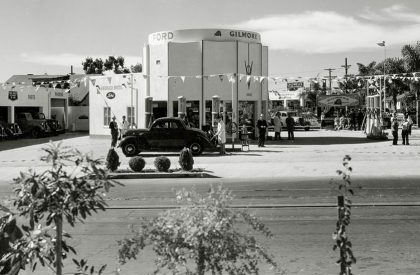