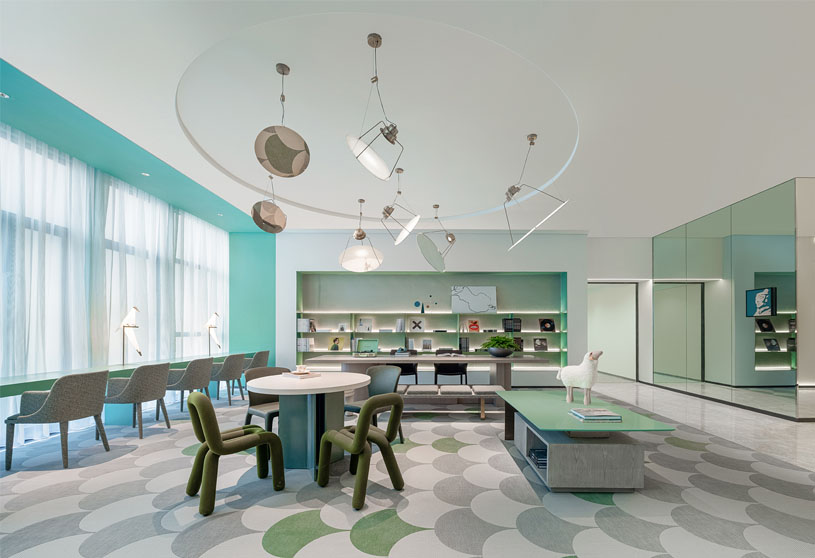 Excerpt: Zhenro·Sky Mansion, designed by Nature Times Design Art, is a model of “working + living” space for an apartment development in Xi’an, China. Based on the approach of deconstruction, the designers broke the traditional spatial pattern and created a modern space that perfectly integrates experiences and functionality. The project integrates functionality, aesthetics, cultural context and creativity, utilizes human-oriented design languages in a natural and simplistic manner, and showcases an exemplary lifestyle space to young urbanites.

Shenzhen-based Nature Times Art Design created a model “working + living” space for an apartment development in Xi’an, China. Based on the approach of deconstruction, the designers broke the traditional spatial pattern and created a modern space that perfectly integrates experiences and functionality.

A novel space in the context of urban renewal

Situated at Daming Palace Commercial Circle and adjacent to Daming Palace National Heritage Park, the project carries the memory of the city. It’s located in an old quarter of Xi’an, surrounded by urban villages and resettlement housing. In the context of urban renewal, the old urban area is driving property development by culture and promoting functional upgrades through improving commercial facilities.

In view of the great development potential of this area, lots of brand residential developments, large-scale commercial facilities and star hotels have been settled there. Based on differentiated positioning, the project presents an innovative space. Targeted at young entrepreneurs and urbanites, it explores to create a novel living model which combines commercial logic and social value.

A lightweight and exquisite aesthetic

The space is laid out on the ground floor, which has some pre-existing columns. The design team created an unexpected large-scale feeling in the limited space.

The overall space consists of a co-working area and a show flat, both for display purposes. The shared workspace is open, which accommodates a book bar, conversation area, fitness and leisure area, creative artworks, movable work stations and independent office, to satisfy diverse working demands. The show flat is exquisite, featuring a meticulous combination of details.

Metaphorical visual symbols are brought in, to echo local cultural context and carry the memory of the city. In the foyer, the bird-like art installations and the abstract artwork that outlines a “terra-cotta warrior” by ropes are modern and fun. Besides, the mirror surface and the metal light fixture complement each other, both integrating functionality with artistry. The spatial design well balances solidness and lightness, evokes the users’ emotions and gives them an energetic feeling.

As a model “working + living” space in an apartment building, the project emphasizes low-cost construction, in line with sustainable urban development. Common and relatively cheap materials were selected for decoration. Low-cost colorful paint was utilized to enrich the interior surfaces, hence producing a relaxing atmosphere and aesthetic visual effects. After the space fulfils its display purpose, the book bar and the fitness area will be retained, to serve the dwellers of the apartment building.

On the premise of creating a comfortable environment, the design team incorporated Bauhaus-style elements into spatial details. The bronze mirrors fixed onto the ceiling, the bronze lighting fixture that emits dots of light, the bird-shaped desk lamps, as well as modern adornments placed on the shelf, together generate unique effects. Story-telling elements and symbols run through the entire space and inject imagination into it. Creativity is embodied in materials and color palettes, which highlight the inspiring character of the space. 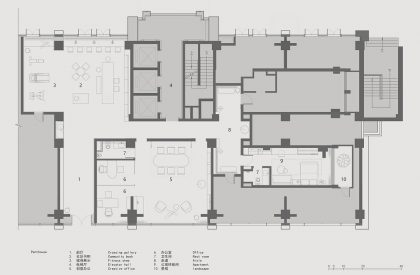 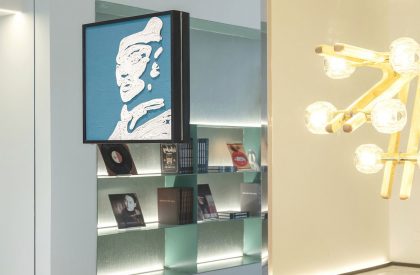 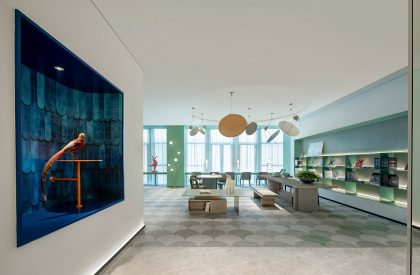 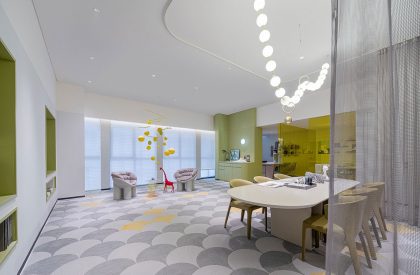 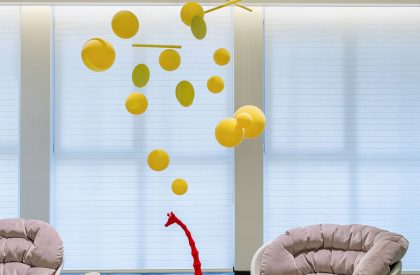 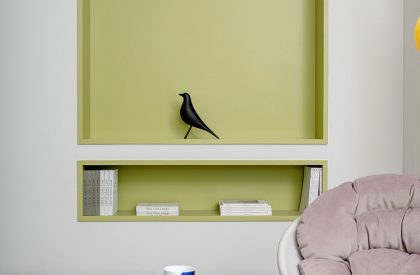 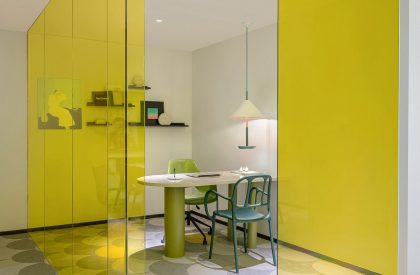 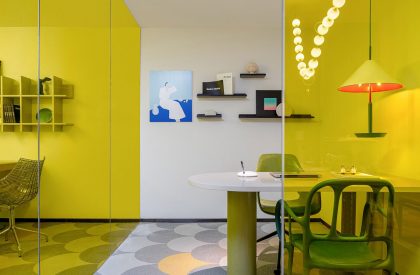 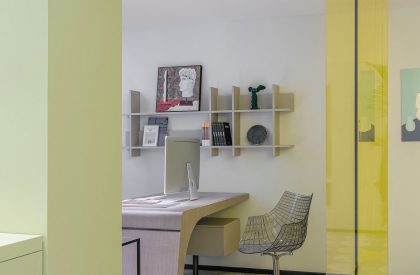 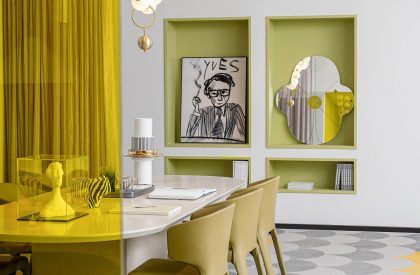 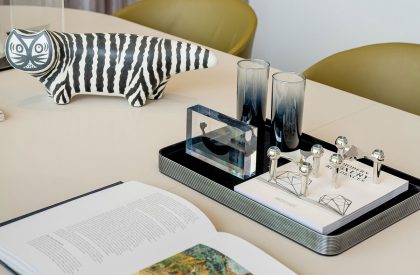 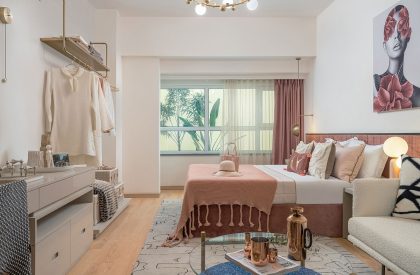 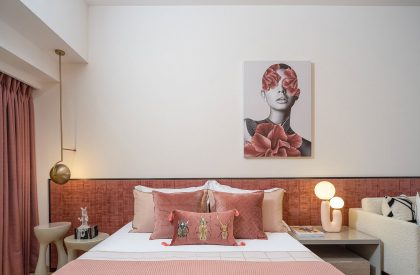 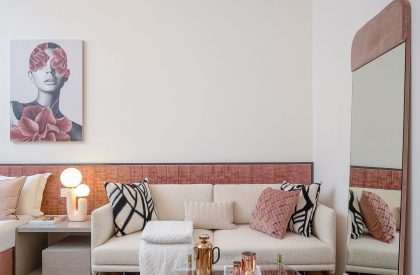 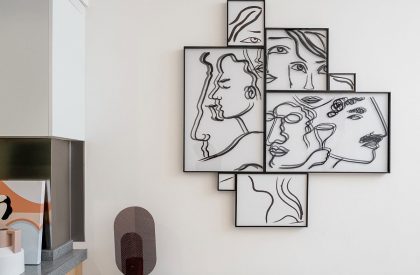 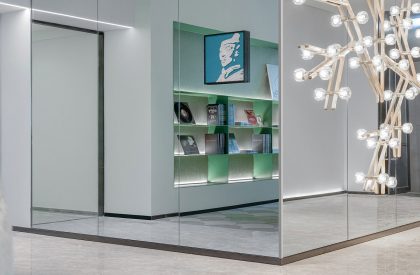 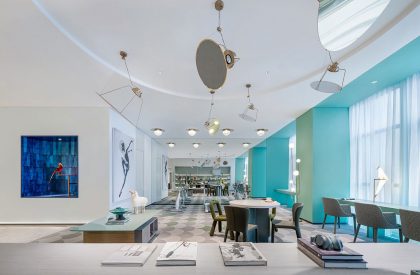 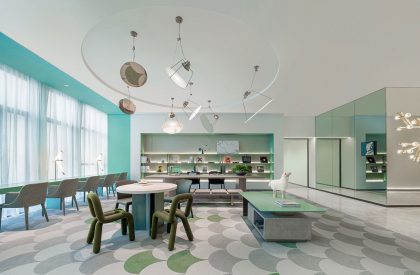 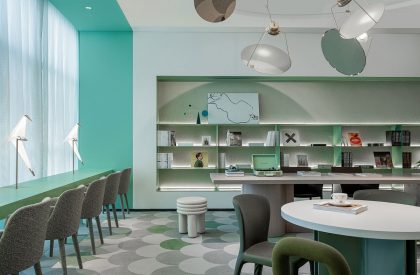 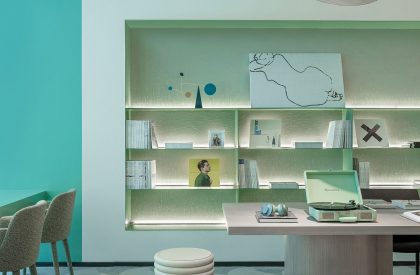 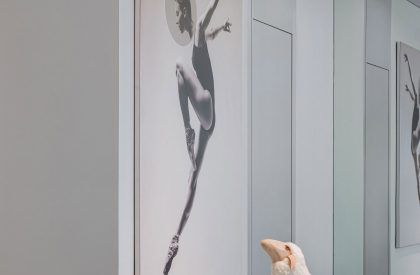 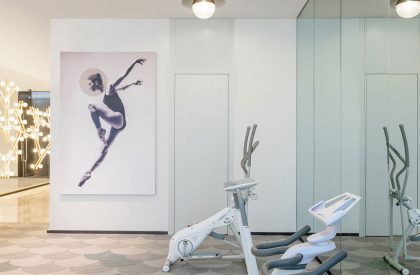 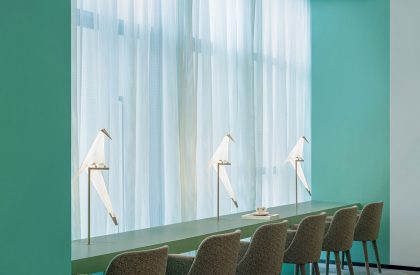 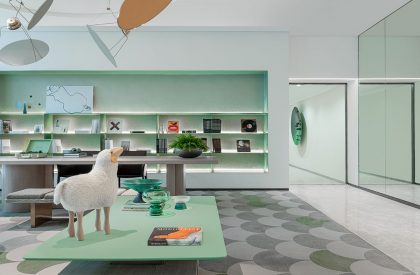 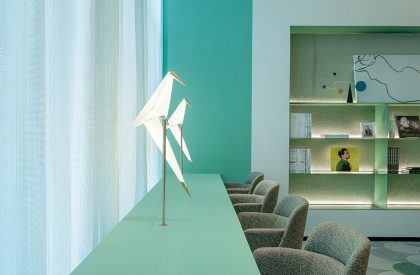