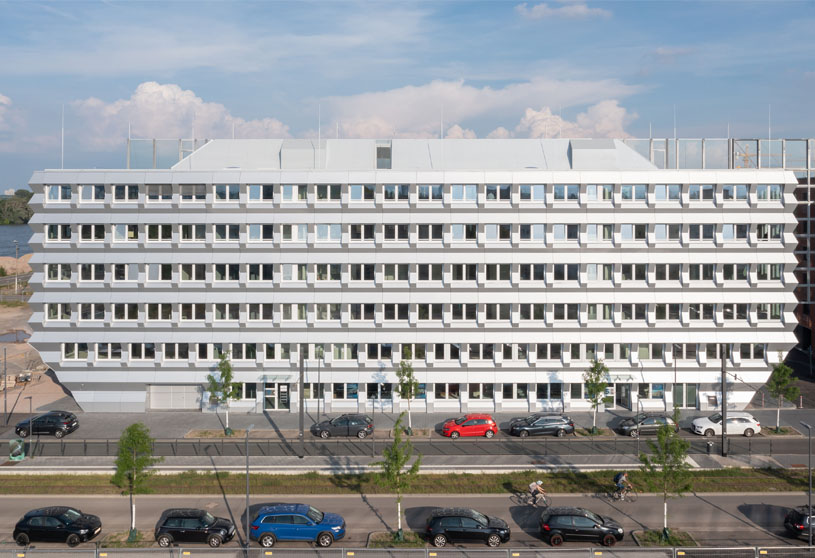 Excerpt: Zig Zag is an architectural project designd by MVRDV in Germany. The 4,600m2 building is the defining feature at the northern end of the harbour basin; located on the newly renamed Rotterdamer Platz, it opens onto the new waterfront square while acting as a noise buffer between the new urban quarter and the remaining industrial zone further to the north.

[Text as submitted by architect] MVRDV Presents ZigZag, a flexible office building in Mainz’s Zollhafen Construction has completed on ZigZag, an office building designed by MVRDV and Berlin-based morePlatz, which pioneers the transformation of Mainz’s Zollhafen from an industrial area to a lively city quarter. With its zig-zagging “folded skin” of aluminium panels, the six-storey building creates a landmark at Zollhafen’s Hafenspitze, enjoying views over the entire harbour basin. MVRDV and morePlatz designed ZigZag for the real estate company CA Immo. Like many of Europe’s formerly industrial harbour areas, Mainz’s Zollhafen is undergoing a transformation into a modern city quarter. Located northeast of the city’s Neustadt district on the west bank of the river Rhine, the former shipping container harbour will be converted into an urban mix of living, working, and leisure facilities, a significant urban transformation which will be one of the one of the most important regeneration projects in the city’s recent history. ZigZag is one of the pioneer projects in this large-scale transformation.

The 4,600m2 building is the defining feature at the northern end of the harbour basin; located on the newly renamed Rotterdamer Platz, it opens onto the new waterfront square while acting as a noise buffer between the new urban quarter and the remaining industrial zone further to the north. To further reduce the noise impact on the new housing blocks, the design features an additional soundproof wall, consisting of a steel frame with glass panel infills that spans between ZigZag and its neighbours. The façade of the six-storey building features a ”folded skin” of matt-silver coated aluminium panels, responding to the urban framework for the Zollhafen area. The depth of the elements allows external sunshades to be integrated and reduces glare. Light reflections from the silvery cladding emphasise the 3D visual effect to reinforce the sculptural impression of the building. On the ground floor, the zig-zagging façade tapers inward, providing extra outdoor space and opening up generous sightlines and pathways from the street to the water’s edge.

The interior can accommodate multiple tenants; people will access ZigZag via two independent lobbies on the ground floor, which also hosts a catering area on the waterfront. From the second to fifth floor large, open spaces allow tenants the maximum possible flexibility in fitting out their offices, enabling everything from individual offices to open space solutions. The building incorporates modern, future-oriented office features such as smartphone-controlled lighting and temperature levels, while wireless solutions have been included throughout the building.  “With ZigZag we have designed a functional yet visually striking addition to Mainz’s exciting new quarter”, says MVRDV Founding Partner Jacob van Rijs. “With the new public plaza at the centre of our plan, we wanted to encourage people to enjoy the waterfront and discover the transformed harbour. ZigZag lies like a ship at the end of the harbour, modest yet at the same time recognisable thanks to its folded, reflective façade.”

“We are very happy to see the completion of this building designed in collaboration with MVRDV – in particular we are happy that the original competition design could be realised”, adds Founder of morePlatz Johannes Schele. “In the urban concept of the Hafenspitze, the sloping cantilevers of the volumes enhance the public space and views toward the harbour. The expressive folding of the façade is reminiscent of modern sculptures, such as the ‘endless column’ of Brancusi.” ZigZag was designed for the real estate company CA Immo. MVRDV and morePlatz collaborated with executive architects Schmidt Plöcker Architekten, structural engineers Planungsgemeinschaft Toni / Schwarzbart + Partner, mechanical engineers Plan-B, and electrical engineers Schad-Hölzel.