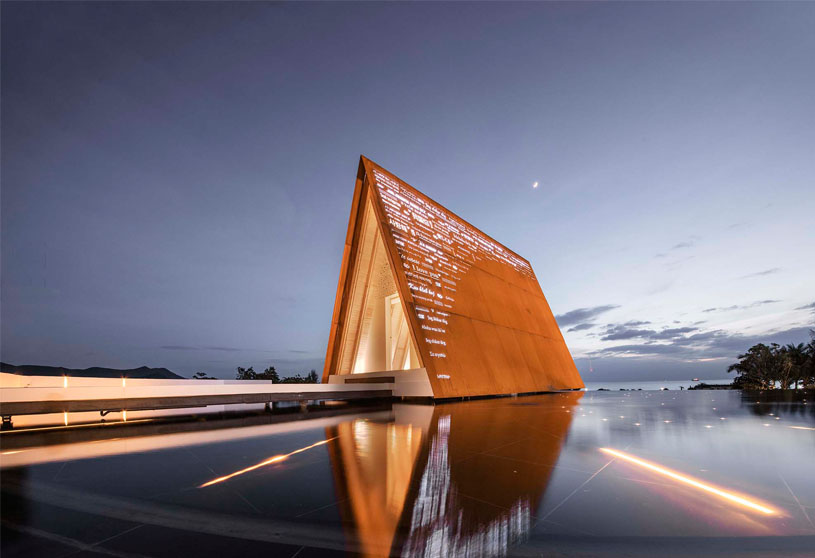 Excerpt: Dysis Chapel of Poly Shallow Sea, Sanya is an architectural project designed by UDG in China. The project provides a venue that responds to people’s spiritual pursuit for happiness and brings them pleasure, joy, sensitivity and inspiration.

“The Moment is Eternity”

[Text as submitted by architect] Situated on the south edge of mainland China, the project faces the vast South China Sea and embraces the most beautiful sunset. The architects captured the most essential elements of nature, i.e. sea, sky, and sunset, and combined them with two powerful artificial elements: triangle and circle. Erecting between the boundless sea and sky, the measurable building volume reveals poetic expressions of time, eternity and sanctity, warmth and romance, grimness and sublimity, and creates a sense of infinity.

The simple yet compelling triangle structure pierces the sky with strong spirituality, like an eternal monument between the sea and sky. Sunset light shines through the central gap of the structure, materializing the perception of time. The rotating device orients towards the position of the setting sun all year round, vividly implying that the moment is eternity. It is in this way the building perfectly fulfills its functions — chapel of a love-themed cultural town used for host weddings, and a popular destination for lovers.

Yazhou Bay is situated at the south corner of Hainan. Though it’s not as famous as Yalong Bay, Sanya Bay or Haitang Bay, it enjoys a profound cultural context. In ancient times, based on the Maritime Silk Road, many Chinese dynasties set counties here, making it a prosperous, livable place with dynamic cultural activities and convenient transportation. Poly Shallow Sea is a community located on the seaside of Yanzhou Bay and surrounded by scenic spots such as Fairyland and South Mountain. Merely 200 meters away from the sea on the south, it enjoys a fantastic seafront position which provides an optimal view of the sunset.

Yazhou Culture, after more than two thousand years of development, is compiled in the book Yazhou Chronicle, which inherits the original Tianya Culture in Hainan. The superior, comfortable natural conditions and romantic sea and sky landscape breed the local custom of worshiping romantic love, and the unconstrained character of Yazhou.

This project is differentiated from other coastal projects in Sanya City, by drawing on Yazhou’s folk customs and characteristics to create a local cultural brand — “Legendary Yazhou, Romantic Paradise”. Yazhou Bay enjoys beautiful landscape of shallow sea, mirror-like sky and romantic sunset. The design team adopted architectural approaches to express and strengthen its natural advantages, and to make the marvelous sunset view an iconic symbol of Yazhou Bay.

The design combines local cultural elements and excellent natural landscape resources, and integrates romantic weddings and love into the venue. The spaces are connected by themes like “first sight”, “love” and “oath”, to create a series of touching scenes including “Dysis Chapel”, “Love in the South”, “Childhood Sweetheart Station”, and “The Poems with Flowers”. The Dysis Chapel is undoubtedly the core, spiritual space that dominates all spaces.

Circular form is frequently seen in ancient ritual places, such as the Stonehenge. The soft circular shape of Dysis Chapel reconciles the complicated relationship within the master plan. With a complete and perfect geometric shape, the circular volume offers people an open view to the vast sea as they stand on the second floor, and helps form a clear spatial relationship. The sharp form of the triangle structure breaks the completeness and softness of the circle. It is like the spire of an ancient oriental tower or a gothic church, indicating people’s yearning for establishing a relationship with God (sky) and thus building a connection with everything in the world.

A straight line that deviates from the center splits the circle into two pools of varying heights, with a “water curtain” in between. Two walking paths are formed by the two high walls and ramps in the courtyard. The lofty walls cast a large area of shadows on both paths. The calming, mysterious interplay of light and shadows adds a solemn monument-like atmosphere to the space.

Walking upward along the curved ramps on both sides, people can have a glimpse of the sky and sea through the gaps of the water courtyard walls. The scene of a water courtyard filled with light and shadows unfolds slowly on both sides, and the water curtain represents the boundary between the secular and the spiritual, light and darkness, and the known and the unknown. The gurgle of water symbolizes the dialogue among time, space, and people. The chapel adopted a classic symmetric layout to emphasize the sense of ritual. On the axis of entering the chapel, a bell tower is added as a ceremonial node of the space. The vaulted bell tower and the mysterious triangular chapel form a playful space similar to that in Monument Valley, carrying memories of the bygone times as well as a futuristic vibe.

The architects utilized shadows to endow the building with a distinct form, and emphasized the interdependence of light and shadows. The corridor space concealed in shadows and the symmetrical layout imbue the building with a sense of monumentality unique to classical architecture. Shadow becomes a vital element to interpret light and sacredness. Through the narrow gaps, a vast yet mysterious world of tides, sea breezes, sun, moon and stars is revealed. The window frame of the chapel is designed based on a T-shaped structure, while the curved wall and the protruding second floor slab also form an abstract “T” shape. Meanwhile, the imagery of cross is intentionally avoided, in order not to evoke association with Christianity. Instead, the architects integrated the references to sacredness from various cultures into the design, expecting people to resonate with the venue subconsciously.

Chasing rays of the setting sun

In the initial design stage, the chapel was planned to face the direction of the sunset on Valentine’s Day, on the basis of calculation. In other word, February 14th would be the only day of the year that the view of the setting sun directly fall into the opening of the chapel, to signify uniqueness. However, each moment is different from the others, each moment is precious and each day is special to each person. The architects thought that since it is possible to connect the chapel with the sunset on a certain day, why not make this happen every day? To that end, a rotating stage was added to the final design scheme, to enable the chapel to rotate in accordance with the direction of the sun. Based on the spatial design, the rotating device is attached to the base of the chapel. The bridge from the platform to the chapel is designed to be telescopic and movable. During a wedding ceremony, the bridge slowly extends, gradually laying the road of happiness from the sacred chapel.

With abstract, pure, mysterious and romantic geometric spatial structures, the project provides a venue that responds to people’s spiritual pursuit for happiness and brings them pleasure, joy, sensitivity and inspiration. The carefully arranged classical symmetrical layout, the narrow passage leading up the steps, the gurgling water curtain, the tranquil pools, the lofty bell tower, the mysterious ambience, the dazzling light, together with the vast sea, the humid sea breeze, the splendid sunset, and the limitless sunset express the architects’ most sincere wishes to people. 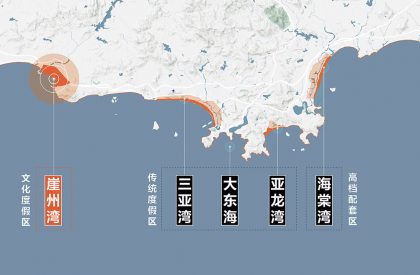 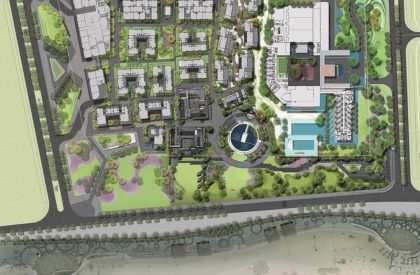 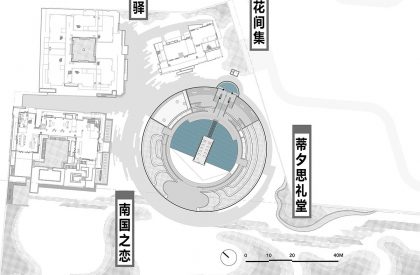 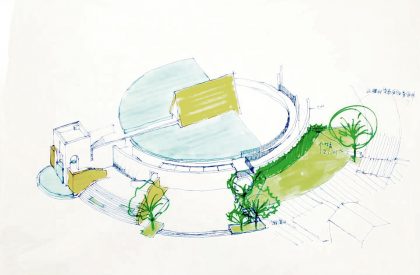 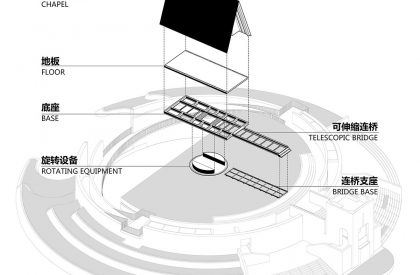 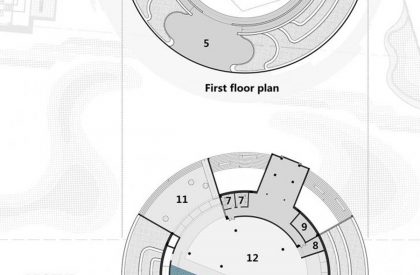 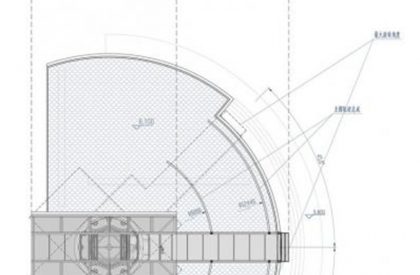 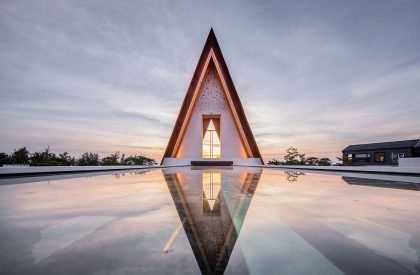 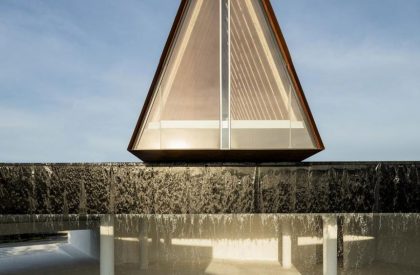 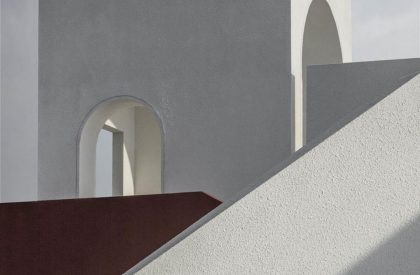 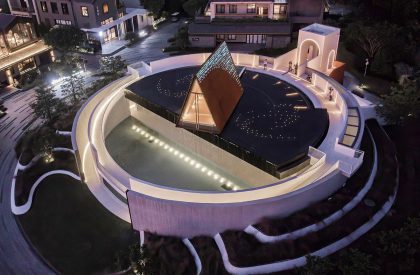 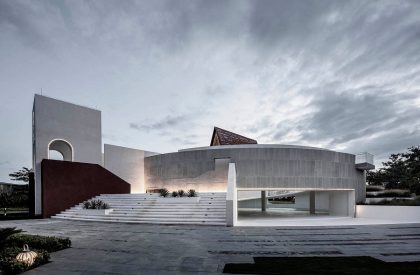 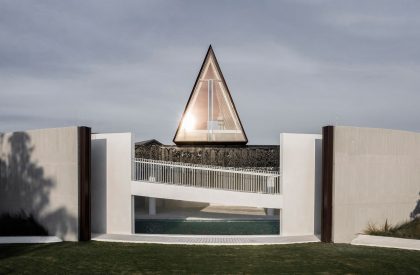 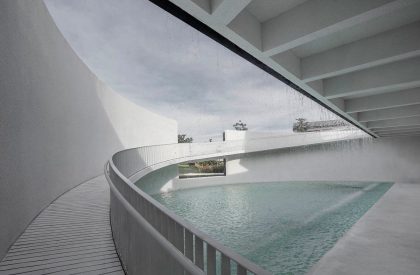 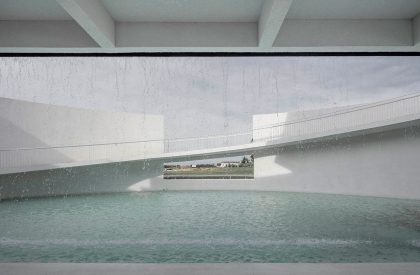 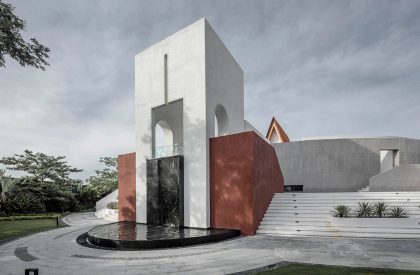 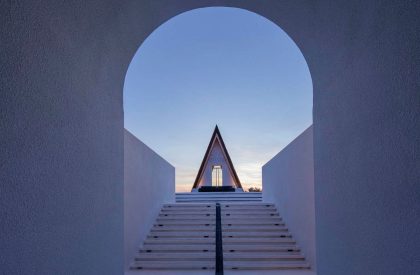 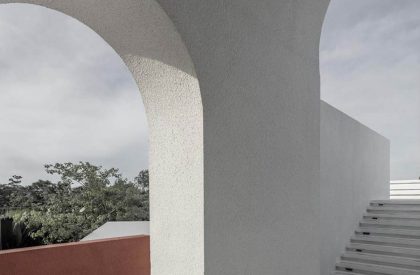 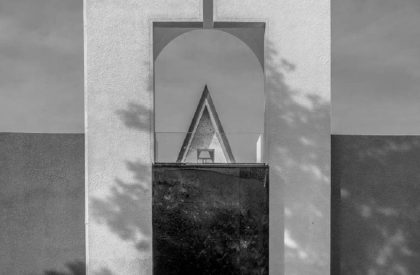 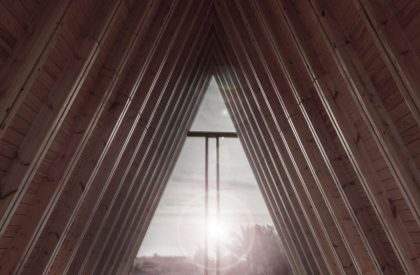 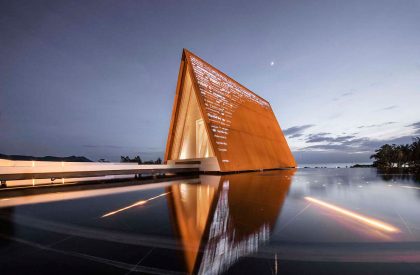 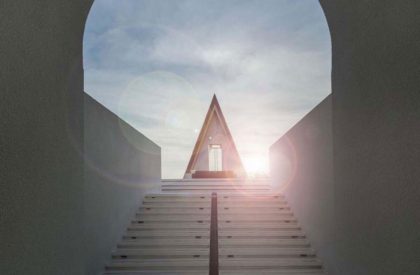 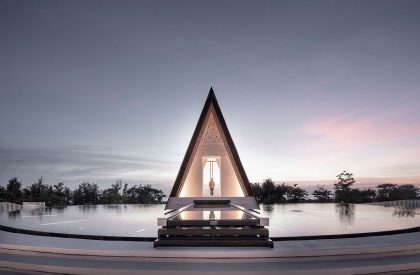