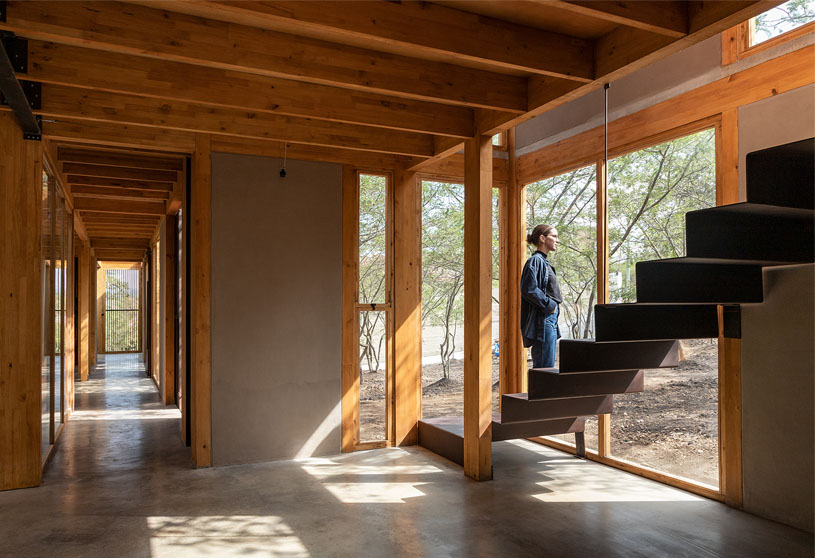 Excerpt: Kaizen house is an architectural project designed by Rama Estudio in Ecuador. The circulation forms an important axis in the house as it is a route that joins the two wings in a straight line and allows one to appreciate the view of the forest from side to side. The intention was always to be part of the forest.

[Text as submitted by architect] The house is implanted in a grove of carob trees in the middle of a slightly sloping topography, trying to influence the natural environment in a minimal way. They took advantage of the benefits of the shade thrown by each of the existing trees. It was decided that the house should have a minimum depth to locate it in the widest plains of the forest and affect the carob trees in the least amount possible. Thus, the house is implemented as a bar 7.50m wide and 24m long. One of the most developed carob trees was attached to the plant, acting as a pivot and articulator of the spaces. Access, the social area and services converge in it. The intention was always to be part of the forest.

Access to the house gives us the idea of “entering outside” allowing the view to be redirected to the outside directly and immediately. A small hall of the carob tree is the one that divides the two wings of the house, a service and a family wing where the kitchen and the dining room are directly connected to a deck through a sliding screen that opens completely to the forest and allows the shadows cast all over the space.

On the left it is made up of a social area that is connected through the deck with the dining room, making the families live the house to the outside and the circulation allows them to connect from the outside of the house. In this wing there is also a multifunction room that can be adapted to families with a room, study or workshop. An independent space that connects to a small-scale patio.

The circulation forms an important axis in the house as it is a route that joins the two wings in a straight line and allows one to appreciate the view of the forest from side to side. On the second floor under the same logic there is an area with two bedrooms that open to the best view and a family area that is in complete relationship with the front forest. A gallery-type circulation axis begins from this point, crossing the carob tree yard and reaching the fourth master’s degree.

All the joints between pieces of wood were solved using screws, reducing only the metal accessories to floor plates. Regarding the closing material of the house, the use of bahareque is proposed. A traditional construction system that consists of wooden frames, a framework of cane or bamboo, covered on both sides with a mixture of lime, cement and earth. The bahareque generates an air chamber that works as thermal and acoustic insulation. Soil was used from the same lot, from the foundation excavations, systems, etc. The rest of the house closes, in wooden windows and tempered glass. The house uses a septic tank system for water management and a gray water infiltration system on the grounds. 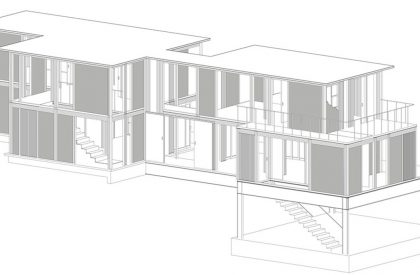 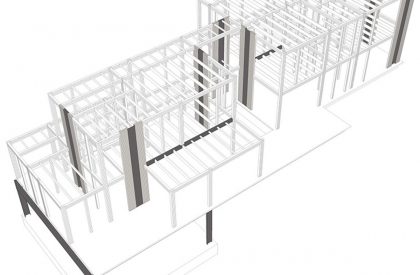 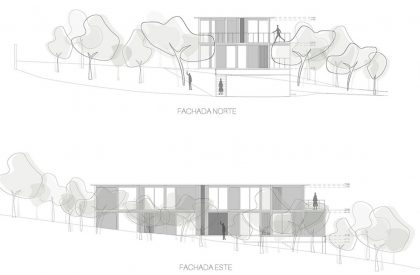 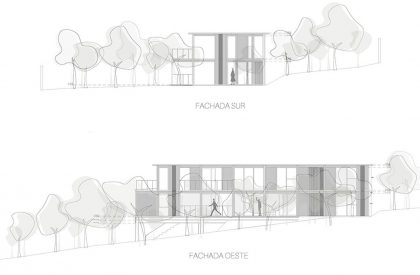 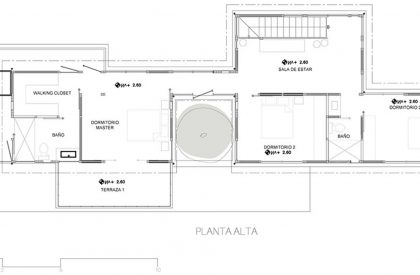 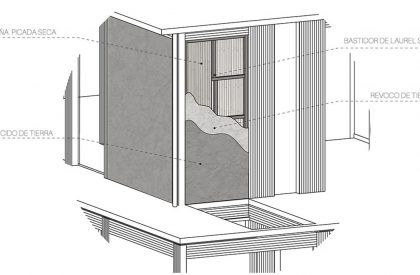 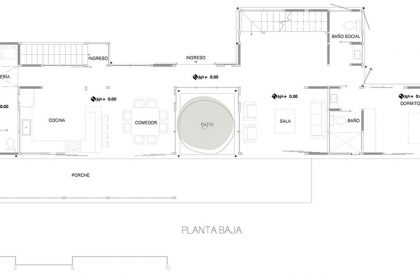 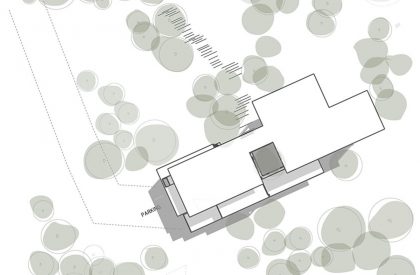 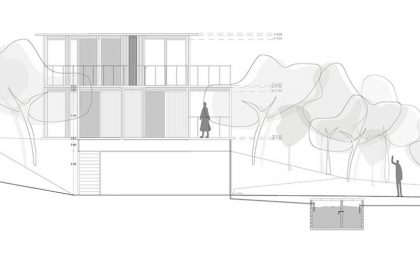 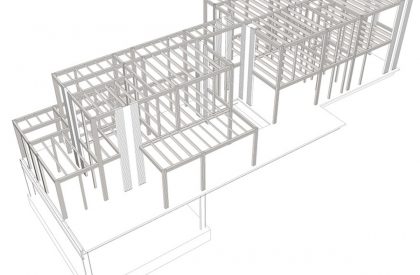 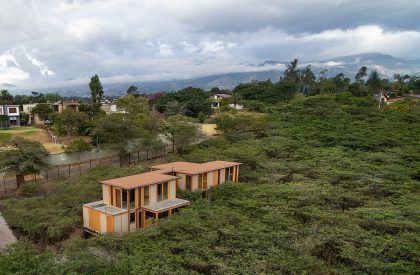 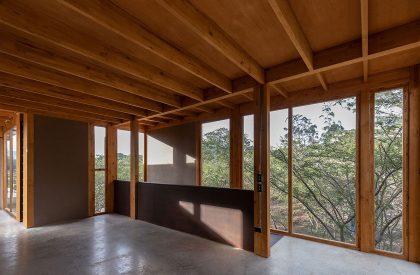 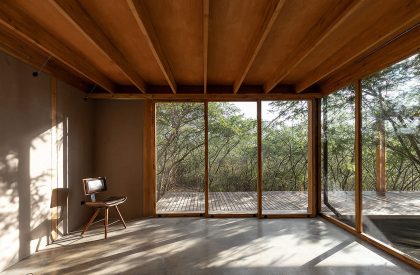 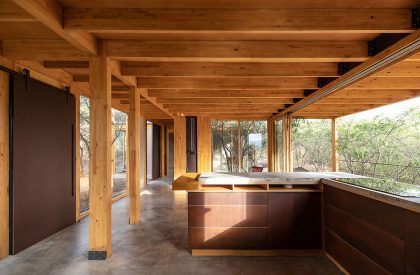 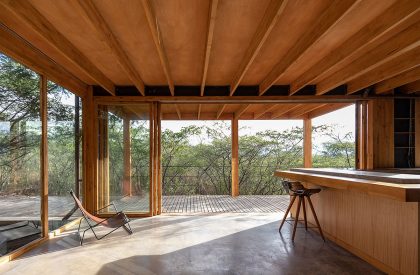 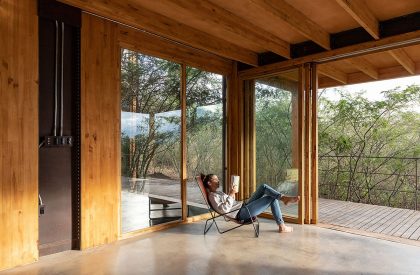 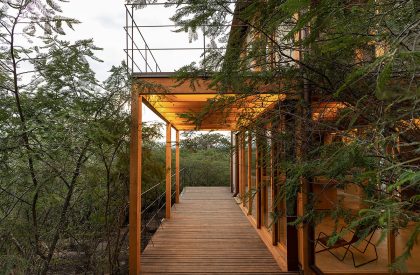 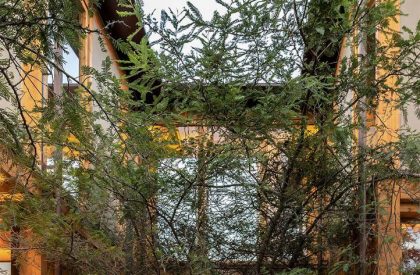 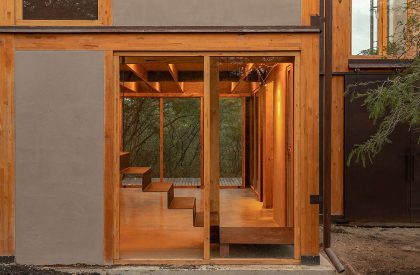 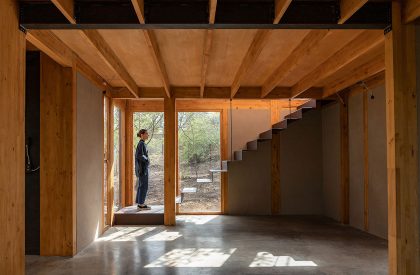 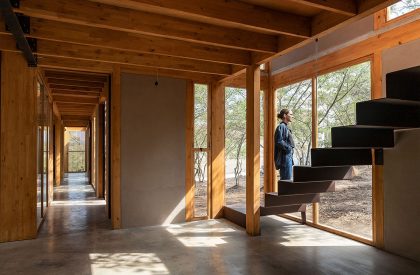 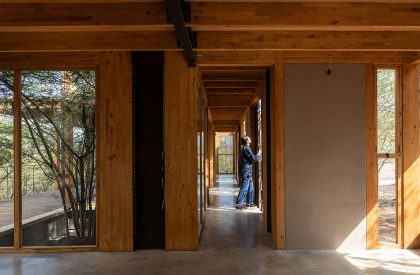 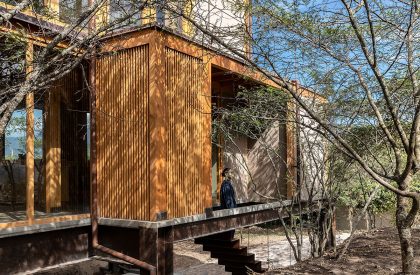