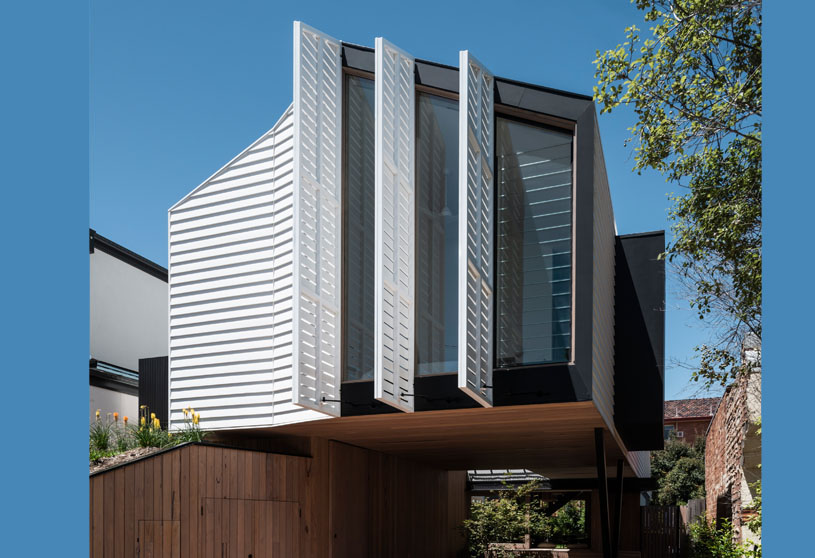 Excerpt: POP-UP House, designed by FIGR Architecture Studio, attempts to counter the status quo of a new family home in a predominantly heritage setting. A common approach with new homes is to occupy most of the site whilst retaining a minimal front setback with a fortified sheer built form that shuts itself off from the public realm interface. Flanked by existing neighbouring brick walls, that become internal edges which establish a dialogue between old and new.

[Text as submitted by architect] Pop-up House attempts to counter the status quo of a new family home in a predominantly heritage setting. A common approach with new homes is to occupy most of the site whilst retaining a minimal front setback with a fortified sheer built form that shuts itself off from the public realm interface. Our approach was to create a home that challenges the aforementioned notion to discover opportunities in the often static, underutilised and forgotten. Focused on engaging with the urban realm, by inviting opportunities for interaction between inhabitants, passer-by’s, and neighbours to promote a sense of community engagement.

When presented from the street, the elevation is an extruded silhouette which is a sympathetic nod to the familiar roof forms of the surrounding vernacular. The upper volume of the building hovers above a landscaped mount that creates the beginning of a journey into the house. Flanked by existing neighbouring brick walls, that become internal edges which establish a dialogue between old and new. The hovering belly of the house creates an undercroft that guides the guests into the house through lush, landscaped gardens creating a multi-faceted zone in the front yard that can adapt and evolve in program/use. The green landscaped wedge is planted with native vegetation which gently slopes back to the street frontage creating a mount that engages the public realm. From the outset our clients felt their new home had to engage with the context beyond the site boundary creating a visually engaging public setting where neighbours and friends can be part of informal gatherings.

This modest 200m2 home required constraint and duality of use in its architecture. The in-between/ambiguous spaces had to contain multiple programs. One of such programs is the study positioned within a thoroughfare activating an otherwise underutilised threshold. The green wedge facilitates bicycle storage, building services and a water retention system. The outdoor terrace extends into a netted area, utilising the in-between space to create additional zones for play and activation whilst allowing light to penetrate the front courtyard. To further remove the idea of redundancy, the underbelly of the dwelling doubles up as a carport, an extension of the workshop and informal entertaining area.

This mouldable zone provides long term flexibility for adaption of use. Increased site permeability through various garden zones and a generous garden at the rear of the site. High quality thermal insulation throughout the walls, roofs and floors with under slab insulation and thermally broken timber framed double-glazed windows. Where possible we have sourced local trades,
materials and fittings. The Pop-Up House is designed to be durable and long-lasting. The roof is clad in Surfmist Colorbond which reduces heat build-up in the home and the heat island effect in our cities. The walls are predominantly white painted weatherboards with accents of Silvertop Ash cladding.

The roof form allows for strategic placement of solar panels for optimum capture. A 5000-litre water tank has been buried in the front yard. All the roof water is captured and reused to flush toilets and garden irrigation. Custom fabricated mechanically operable screens are strategically positioned on the first-floor western facade for controlled screening of the Western Sun whilst allowing for maximum flexibility in managing solar access and views to the nature strip. 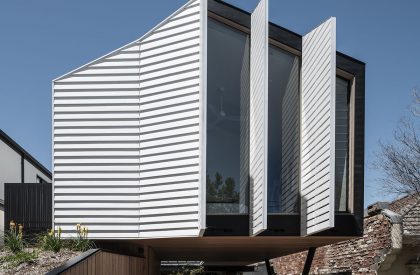 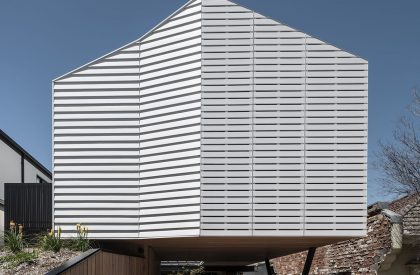 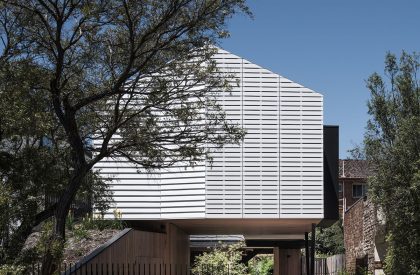 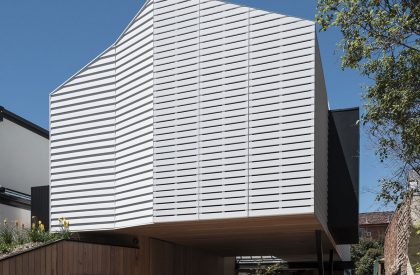 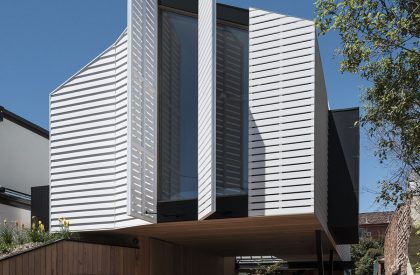 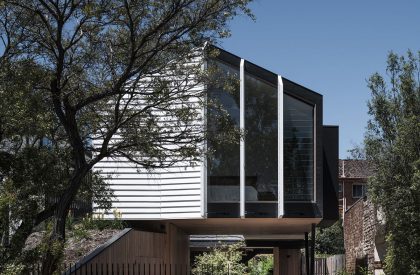 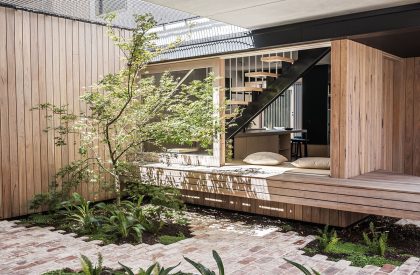 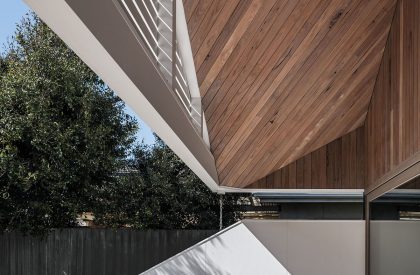 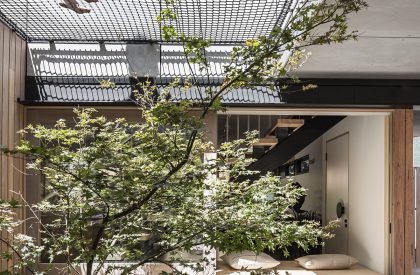 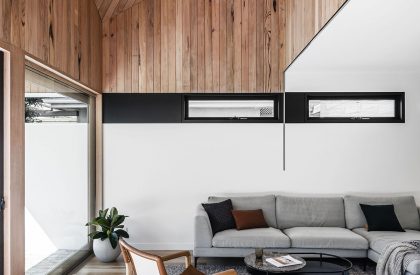 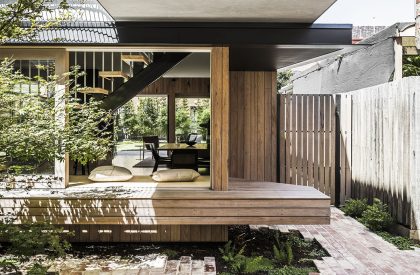 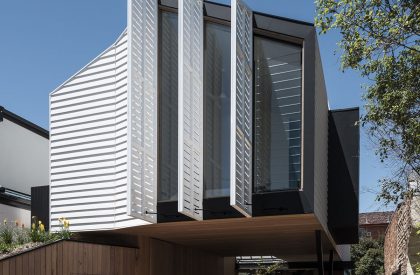 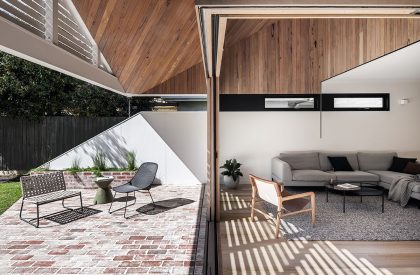 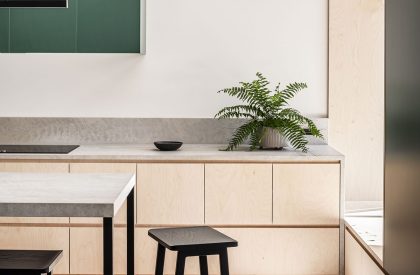 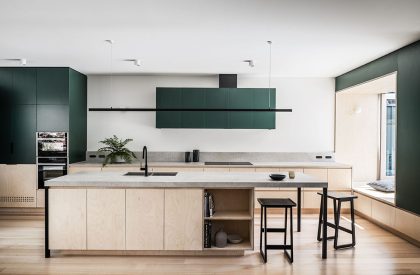 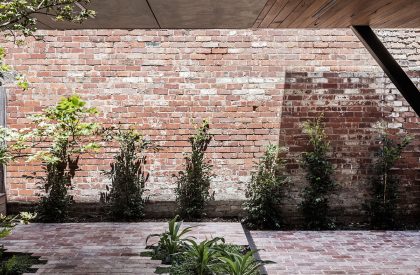 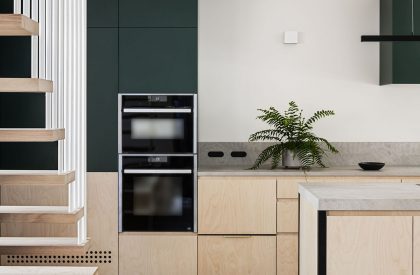 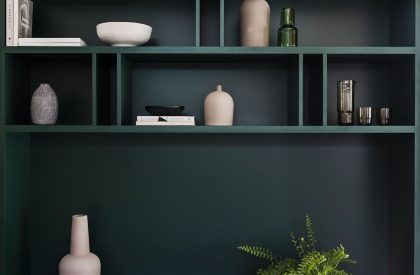 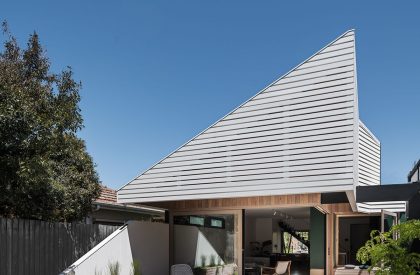 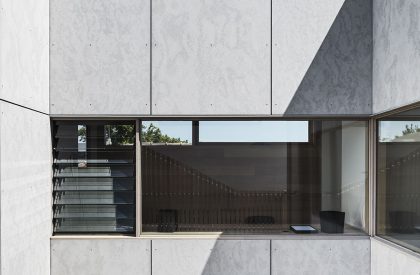 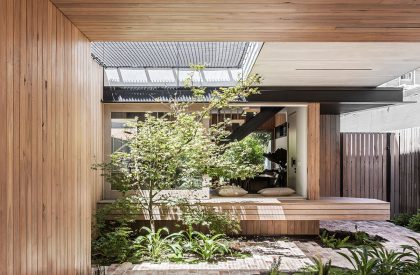 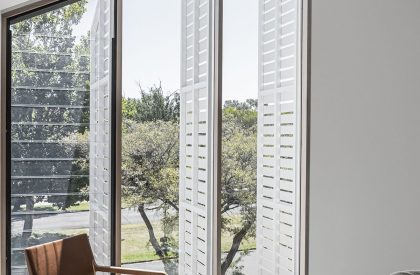 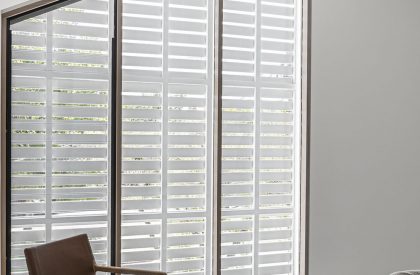 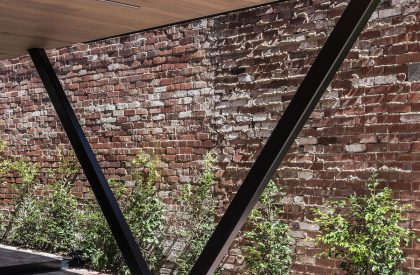 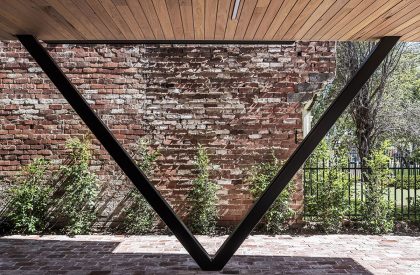