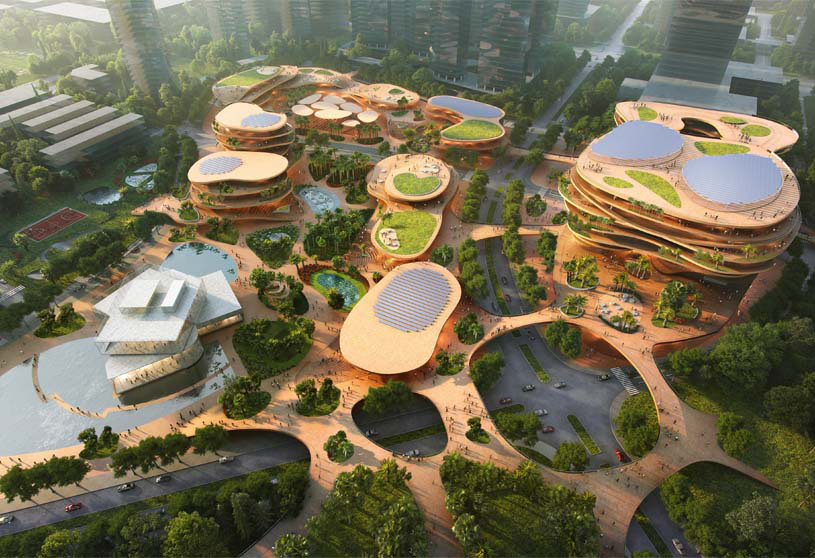 Excerpt: Shenzhen Terraces, designed by MVRDV, is a mixed-use project with sustainability as a focus acting as a new three-dimensional urban living room with more than 20 programs, including a small gallery, library, and outdoor theatre. MVRDV’s Shenzhen Terraces aims to bring vitality and innovation to the area through a seamless integration of landscape, leisure, commerce, and culture. The central concept of Shenzhen Terraces is to merge the existing landscape with the new development by using stacked plateaus for its various buildings.

[Text as submitted by Architect] MVRDV has been selected as the winner in a competition to design the 101,300-square-metre, mixed-use Shimao ShenKong International Centre. Located in Universiade New Town, Longgang District, Shenzhen, MVRDV’s Shenzhen Terraces was selected from 27 entries by international design firms. Designed with sustainability as a focus, the completed project will form the core of the thriving university neighbourhood, acting as a new three-dimensional urban living room with more than 20 programs, including a small gallery, library, and outdoor theatre.

MVRDV’s Shenzhen Terraces aims to bring vitality and innovation to the area through a seamless integration of landscape, leisure, commerce, and culture. Located in the heart of the Longgang district at the meeting point of high-rise housing, commercial complexes, and sports and educational facilities, the site is ideally located to serve as a defining public space within the region.

The central concept of Shenzhen Terraces is to merge the existing landscape with the new development by using stacked plateaus for its various buildings. The predominantly horizontal lines of the terraces contrast with the vertical lines of the surrounding high-rises to bring about a sense of tranquillity through their slow curving shapes.

Combining a pedestrian-friendly landscape with a mixture of functions and public transport, Shenzhen Terraces is poised to become a sustainable hub for the surrounding area. The abundant planting and water features reduce the local temperature and provide habitat for urban wildlife, while gardens and rainwater collection generate food and water resources. The concrete used in the buildings themselves will be made using recycled concrete as the aggregate, and photovoltaic panels will adorn extensive portions of the rooftops.

The terraces are adapted to serve a diversity of functions: large overhangs shield the visitors from the hot sun, while offering places to sit and enjoy the view. These shaded terraces create places for plants and water basins that cool the verandas and create a climate buffer to the interiors. The edges of the terraces dip at strategic points to form connections between the various floors and to double as small outdoor auditoriums. In other places, the facades are pushed inwards to emphasize entrances and create recognizable places within the scheme to help visitors orient themselves. The largest building – containing among other things a bus terminal, conference centre, and entrepreneurship centre on the east of the site – is carved out in its centre to form an open-air atrium. Finally, bridging elements are introduced between the various buildings, turning the second floor into a continuous route and connecting it with the surrounding developments. These connections knit Shenzhen’s newest urban living room into its context, making it one with the city and offering access for all.

“Shenzhen has developed so quickly since its origins in the 1970s”, says MVRDV founding partner Winy Maas. “In cities like this, it is essential to carefully consider how public spaces and natural landscape can be integrated into the densifying cityscape. The urban living room of the Shimao ShenKong International Centre will be a wonderful example of this, and could become a model for

the creation of key public spaces in New Town developments throughout Shenzhen. It aims to make an area that you want be outside, hang out and meet, even when it is hot – a literally cool space for the university district, where all communication space can be outside. It will truly be a public building.”

The design’s landscaping, developed in collaboration with Openfabric, echoes the pebble-like forms of the terraces above to create patches of greenery and public programming between pedestrian routes. These patches host planting that imitates the sub-tropical natural forests of the region, mixed alongside features such as grassy hills, palm tree-filled plazas, public art, reflective pools, and activity zones for pursuits such as climbing or table tennis. The landscaping also extends to the roofs of the buildings, with a green lawns that are accessible to the users occupying the areas that are not covered with photovoltaic panels.

Shenzhen Terraces was designed by MVRDV for Shimao Group in partnership with landscape designers Openfabric. 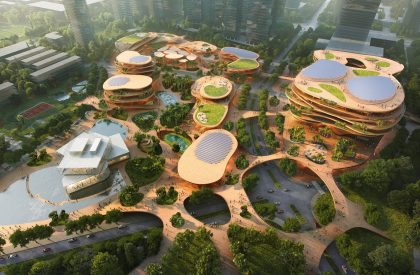 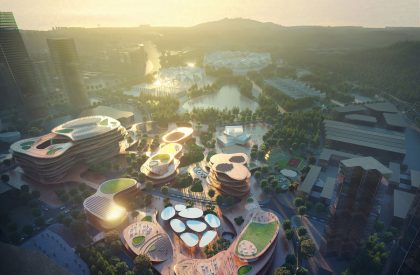 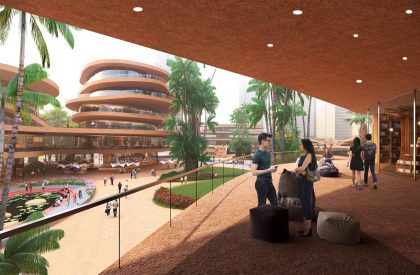 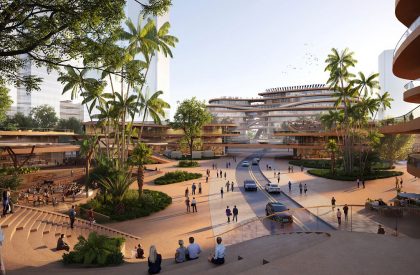 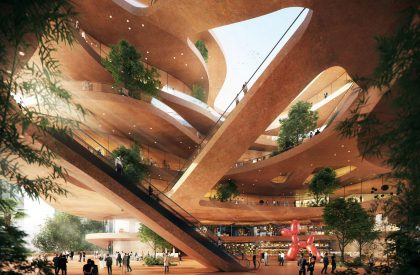 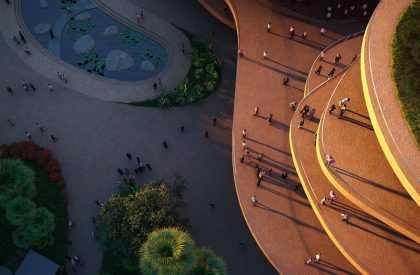 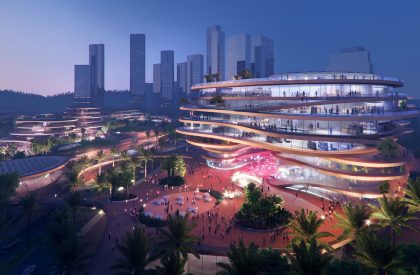 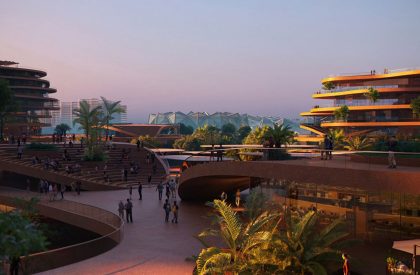