[Text as submitted by the Architects] The main building is divided into five near platonic and bold volumes, each of which is draped by surfaces dedicated to a particular material, responding to its individual functions, climate and context. Each is expected to reflect the intellectual diligence of the organization, to help build relationships at various levels, and strive to be metaphysical. Each spatial atmosphere is compact and complete in itself but relates to the others and the whole.

Finally a singular volume aims to shape its place in the context. The materials are treated with dignity and remain true to themselves while sitting cheek by jowl with each other. The stable and egalitarian cuboid is wrapped in glass on the northern side as a gigantic continuous window that brings in diffused light to enlighten the creative minds at work.

Circular punctures in the floors promote visual and spatial connectivity. Lined up along this transparent facade are files, folders, samples, models, all colour coded according to the various faculties that own them; brown for architecture, orange for interiors, yellow for electrical and so on. As these are removed for use and kept back, not necessarily in the exact same manner, the visual collage of materials and colours changes.

The glass facade becomes a dynamic non-facade. It is not a fake one, but a true reflection of the life within.

The volume attempts to be a permanent exhibition of all five points of Le Corbusier’s architectural tenets, authored in L’Esprit Nouveau and his book ‘Vers une Architecture’; The pilotis, a grid of reinforced concrete columns that makes the heavy load bearing wall obsolete and announces the new aesthetic of the machine age; the free open ‘liberated’ plan that allows unrestrained internal usage; the facade that dethatches itself from the structure and wraps the volume as it wishes; the windows along the entire facade length and the garden transported to the roof.

The solid two-brick thick, load-bearing walls of the brick rotunda take in all the services-the stairs and conveniences and keep out almost all of the heat, so the contained space remains cool. Through bridges, the brick rotunda keeps in touch with the glass box and the stone block. Mid-landings with seats, coffee mug-stands and strategically placed slim-fit windows are tempting pause spaces in the act of circumambulation. The attempt is to make the path the destination.

Beneath the ground, the rotunda quietly slips in the entire electrical setup. The stairs conclude by revealing an open-air amphitheatre up in the sky, securely holding 200 souls itching to introspect. Clad in reflective china mosaic and cooling the water-tank beneath it is this hot-bed of ideas, the think-tank.

A three-meter thick block of stone, vaguely shaped like a trapezium in plan and hollowed out in places offers insulation from sound and heat on the south side. Belonging to an older generation of materials, evocative of not just the architectural traditions of India, but of the very act of building by ancient civilizations, the stone retires behind the modern sleek-looking, cantilevered, colour themed and glass walled rooms reassuring them of its backing. The glass, belonging to the new and young generation, reciprocates by welcoming the anchoring, but through its transparency, ensures that the stone is always noticed. It takes the stone along with it and together they create a symbiotic heritage of today and of tomorrow.

The metallic volume’s temporal nature and multiplicity is a natural consequence of the series of events that unfolded while the building was being designed. The rear setback abutted by the stone wall and the boundary wall got a roof over it while automated rolling shutters completed its sides and lo and behold! the industrial volume made its debut as a badminton court. The portable ‘baddie turns into an audi’ to hold the many discourses on design.

The triangular volume of exposed concrete is coerced into a snug fit in the chamfered western corner of the building and is the site of a guest house with a sunken court at the lowest level, of a state-of-the-art board room with a six metre wide cantilevered concrete table seating twenty-five people at the next level before evolving into the pièce de résistance. The main design studio, a three -storeyed volume with the customary interjections by way of a low ceilinged lounge into it and a solitary punched out circular balcony, is the most intuitive volume. The massive exposed concrete walls create an aura of austere grandeur, acknowledge the architect’s honest self and pay homage to great mentors. They offer tactile backdrops to books, travel miscellany, tools and devices, furniture, light fixtures, valuable collectibles and minds to facilitate architectural exchanges. But at another level, this volume evokes spirituality.

Ironically, the amorphous atrium, the first of the internal volumes a visitor experiences upon entering the fort, is a three-storeyed residual space created by the momentous coming together of all the volumes that constitute the whole building. It welcomes visitors from the chaos of the outside world, offers respite and restores the sense of order in them. The atrium attempts to be a space of stillness, the sanctum sanctorum and is best understood with reference to ‘the hand’; a sculpture made out of scrap that by some quirk of fate looked like Le Corbusier’s ‘open hand’ at Chandigarh when illuminated; a hand that is its deity.

Owing to the larger than life elements as the ten-metre high corten steel door, a moat with a drawbridge, a 150 metre long stone wall with etched cnc elevations of projects and installations as slides, patented products and award winning designer furniture pieces and interior accessories, the studio is a live  three-dimensional canvas that celebrates colours, textures, forms and materials.

Simple measures as ‘correct’ orientation and the employment of appropriate materials have helped solve most of the energy issues. Soft, muted day lighting bathes the ecosystem making it a comfortable space for work. Artificial illumination has been done with a mandate of minimizing. ‘light pollution’. Additionally, with the expansive use of indigenous materials showcased raw, untreated by toxic synthetic chemicals coupled with a huge fraction being shopped and reused as they are, from the ship-breaking yards of Alang, Gujarat, the studio consciously gravitates towards green architecture.

The building echoes the attitude and sentiments of the designers and the practice. 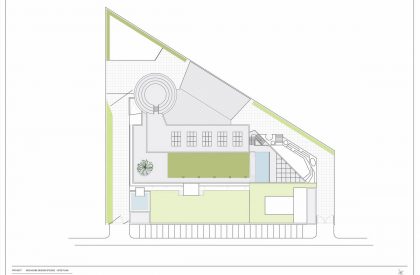 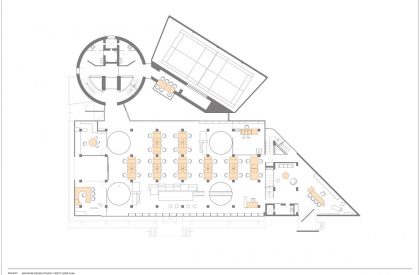 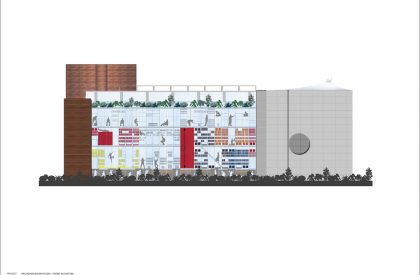 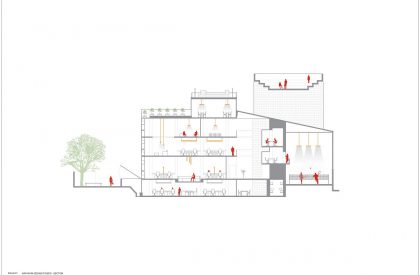 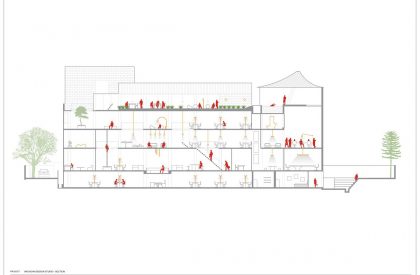 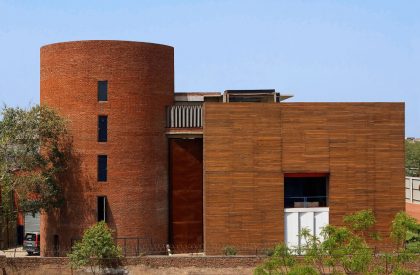 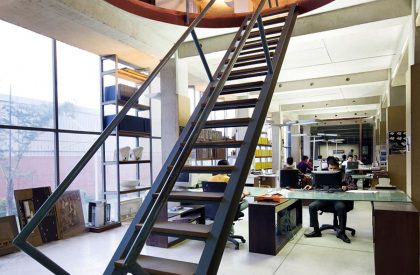 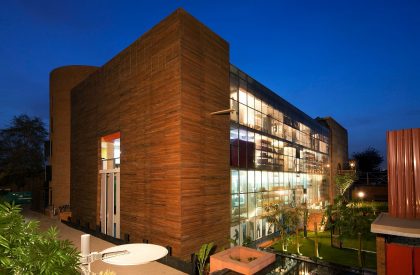 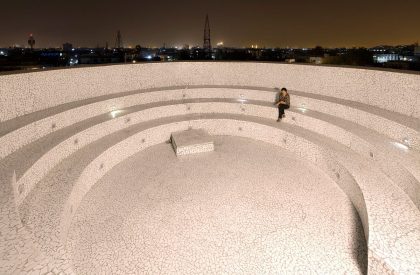 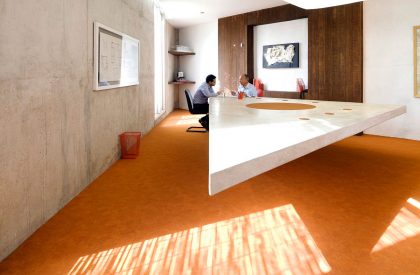 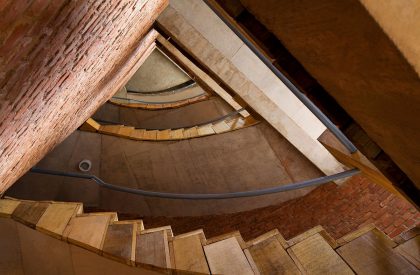 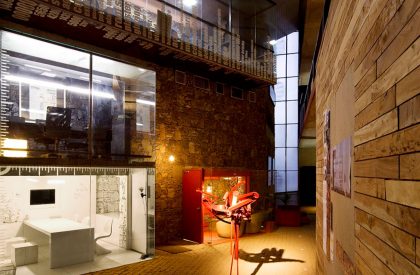 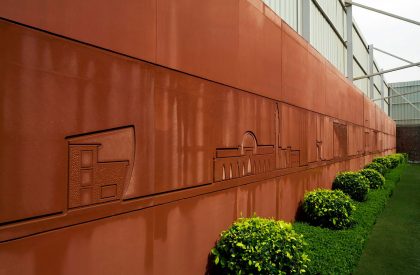 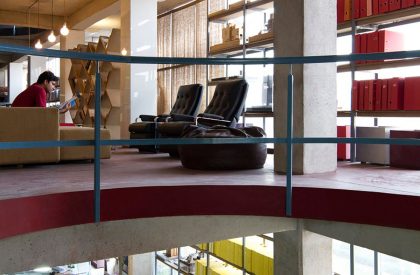