Excerpt: In The House of Remembrance, Neri&Hu have explored how notions of communal living and collective memory can be expressed spatially. The original site featured a lush vegetated edge that formed a natural green buffer along the perimeter, a feature that designers have retained. The new two-story house organizes all communal spaces around a central garden, which occupies the courtyard space serving as a memorial garden for the family’s matriarch.

[Text as submitted by architect] The traditional Chinese courtyard house or siheyuan is a typology well-known for its illustration of Confucian ideals, accommodating extended family units wherein many generations live under one roof. To live under the same roof means to live together, and this metaphor is the nexus that ties the notion of community, especially in an intimate context, to the form crafted for this project. For this private residence commission, Neri&Hu are given a set of unique requests by the client: the new house constructed in place of the previous one should accommodate all three siblings, who as adults have outgrown their shared house; it should include a small memorial space in the form of a garden for their late mother; lastly, the new construction should retain the memory of the pitched-roof form, a defining feature of their childhood home. The previous house was built in the style of the British colonial bungalow, with hybrid elements of traditional Malay houses such as deep roof eaves for rain sheltering, as well as Victorian details. Understanding the functional importance of the roof and the client’s emotional attachment to its form, Neri&Hu embrace the symbolic nature of the pitched roof and combine it with a reinterpretation of the courtyard house.

In this project, Neri&Hu have explored how notions of communal living and collective memory can be expressed spatially. The original site featured a lush vegetated edge that formed a natural green buffer along the perimeter, a feature that designers have retained. The new two-story house organizes all communal spaces around a central garden, which occupies the courtyard space serving as a memorial garden for the family’s matriarch. The ground level is extroverted in nature, with expansive glass walls to connect all spaces to the gardens along the edge of the site. Neri&Hu aim to maximize visual transparency from the communal areas – living room, open kitchen, dining room, and study, so that from the ground floor the inhabitants may look into the central memorial garden while cocooned by the dense vegetation surrounding the house. Large glass doors can slide open, so that in optimal temperate conditions the house can take advantage of cross ventilation and direct access to the gardens.

For the upper level, Neri&Hu pursue the idea of the pitched-roof form as not only a signifier of shelter, but also an element that both unifies and demarcates the public and private realms. All private bedrooms, located on the upper introverted level, are housed within the roof’s steep gables so that when seen from the exterior, the house retains the appearance of a single-story hipped-roof bungalow. Skylights and large glass walls connect to bedroom balconies where views are oriented outwards to the perimeter garden spaces. Through sectional interplay, the design team introduced three double-height areas to connect the communal functions and the corridors above. These spaces of interpenetration create vertical visual connections to allow one to peer into the public realm from the private.

One can see a carved void in the roof volume, which frames a small tree before arriving at the central memorial garden. On the exterior, where balconies and sky wells are carved out from the volume of the pitched-roof form, the walls transition from smooth to board-formed concrete to take on the texture of wooden planks. The circulation on the ground floor is based on the shape of the circle to reinforce the ambulatory experience of walking in the round and to define the memorial space as a sacred element. Since the circle has no edges or terminating vantage points, it allows one to always find a return to the center both spiritually and physically. The garden symbolically defines the heart of the home as an ever-palpable void, persisting as the common backdrop to the collective lives of all inhabitants. 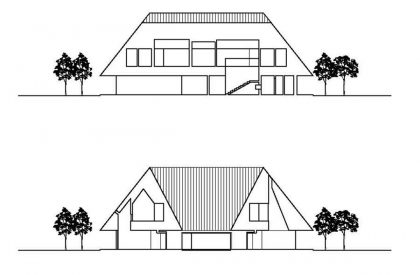 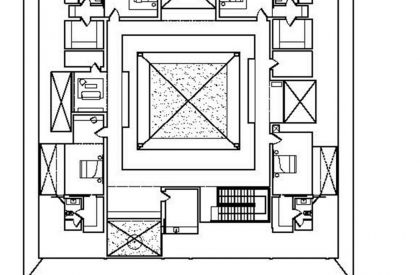 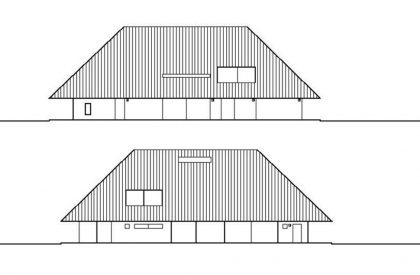 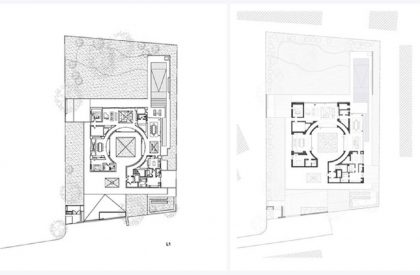 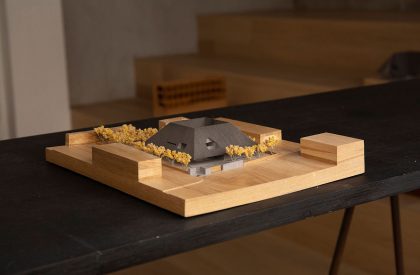 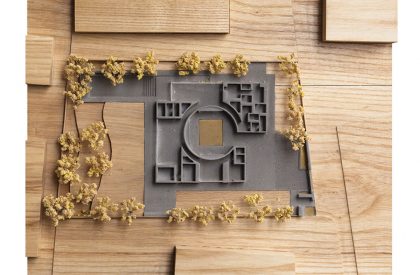 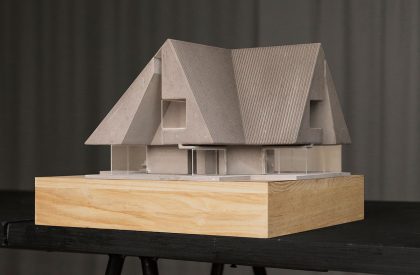 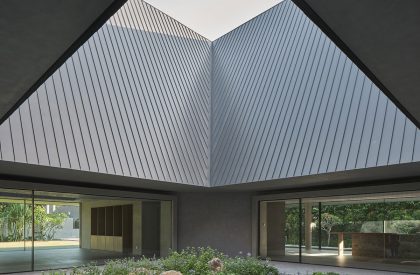 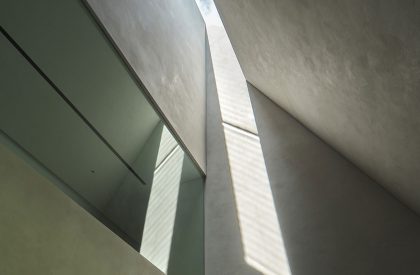 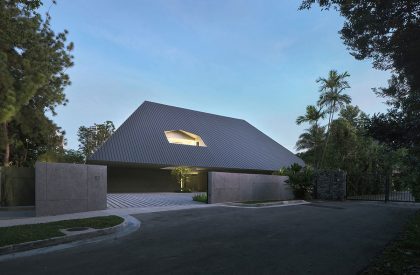 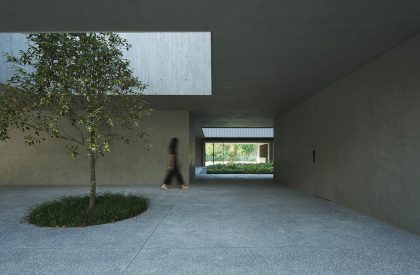 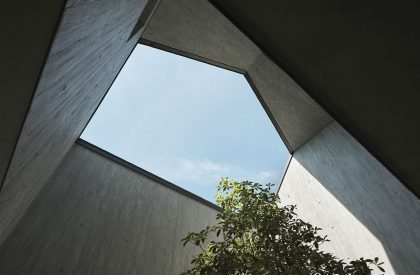 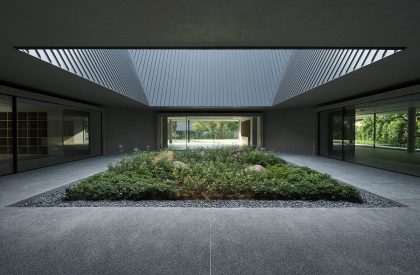 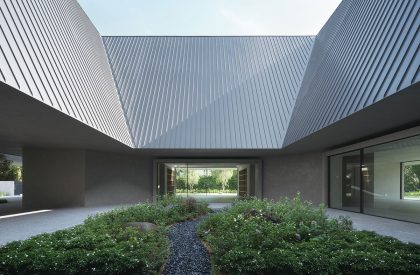 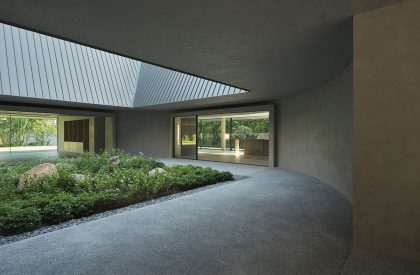 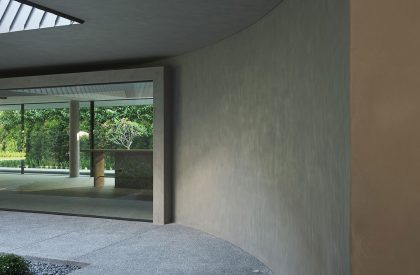 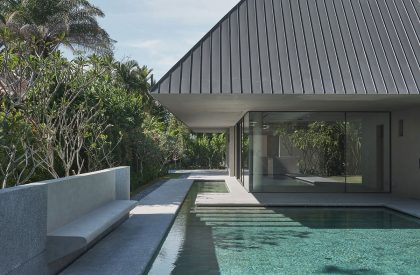 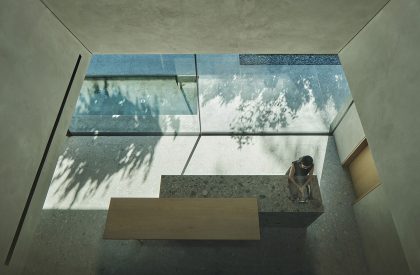 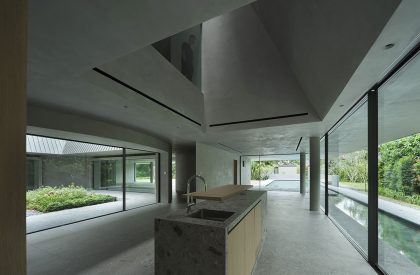 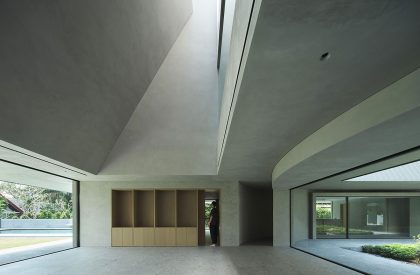 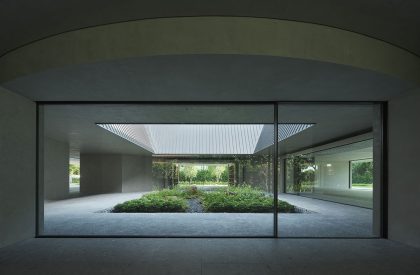 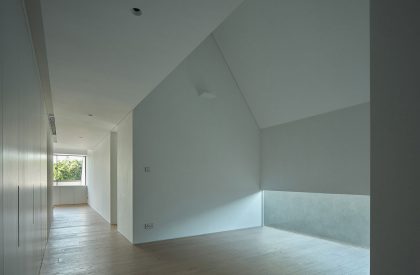