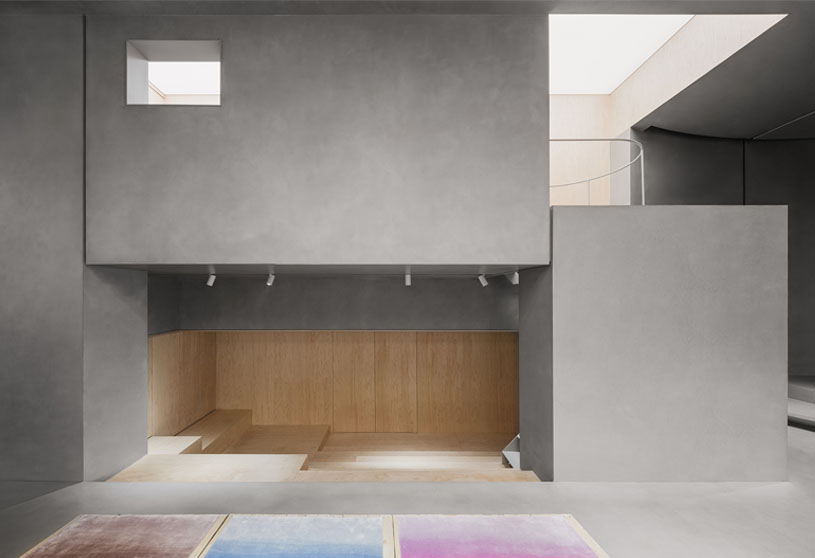 Excerpt: Aether Showroom is an architectural project designed by OUTIN. DESIGN in China. Organic asymmetrical layout and interweaving blocks define a polygonal space, and endow it with architectural beauty and strength. A twisting circulation runs through the entire space.

[Text as submitted by architect] The concept “Aether” originates from ancient Greece, known as the “fifth element” in addition to the four elements of earth, water, air and fire. It is believed to the medium of all physical phenomena, the basic substance that fills the vacuum of the universe, and the component of all elementary particles of matter. From macrocosm to micro nature, from the motion of sun, moon and stars to the fission of cells, all are included in one conceptual system. All beings interact and fuse with other, forming an endless cycle.

This explains the logic behind the naming of aEthEr, a carpet brand that explores natural forms and constantly innovates instead of replicating. As a designer carpet brand, aEthEr hopes its products act as a medium that expresses emotions of space.

The brand’s JIA Series carpet, designed by Wang Chen, is inspired by nature. Its organic, freely interweaving composition forms a “fluid sculpture”. The creation of the carpet implies naturalness, and echoes human nature. In an urban social context awash with vigilance and alienation, it stimulates pure and spontaneous interaction among people.

The landscape photography work “The Power of Growth” by the brand’s principal Li Wei, directly dialogues with nature and presents order and dynamism in the wild forest. The textures and colors of natural organisms inspire the brand space’s positioning for seasonal curation, and breed a series of carpet works that convey natural emotions in daily life.

As conceiving this showroom, OUTIN. DESIGN intended to create a new way of exhibition by making use of the spatial form. With full consideration into the reasonableness of construction, the presentation of art, the commercial logic, and the interaction between people and the space, OUTIN. DESIGN team approached the design in an organic and experimental manner.

Organic asymmetrical layout and interweaving blocks define a polygonal space, and endow it with architectural beauty and strength. A twisting circulation runs through the entire space. The staggered frames separate yet link different areas, enhancing the fluidity of light, air and producing playful visual and auditory experience.

Starting from the narrow entrance, the view gradually opens up. Light, shadows, structures and colors are combined to evoke infinite imagination within the limited space, where simplistic forms and rich details are fully presented. The design takes element units as nodes, to extend the visual and activity field and compose the overall space.

The interpenetrating surfaces blur the spatial order, and the transition of material textures implies the balance of the natural and the artificial. Featuring geometric composition and an artistic form, the staircase functions as an effective medium for guiding the experiential route, and acts as a visual highlight of the space as well.

The design emphasizes the symbiosis of architectural space and nature. The rectangular atrium incorporates the tension of light and shadows, creates a soft atmosphere with indirect light sources, and increases the spatial scale. Each element in the space is like an organism, conveying the emotions of its creators.

Artistic Presentation | Turning the intangible into the Tangible

Through simulating the state of nature and adopting structural expressions derived from natural gardens, the designers created a tangible, imaginative art installation, which injects an organic character and aesthetic lines into the space.

The old texture of waste material carries the traces of time. After processing, it reveals a sense of strength and beauty more relevant to life, and also softens the hardness of industrial civilization.

Construction | Evolving from what Already Existed

Architecture often reflects the living habits and cultural memory of urban people. This is especially true to old buildings. After renovation, this architectural space becomes a mix of past memory, light, shadows and emotions. Its image reveals the fragments of daily life, as well as new thoughts on the relationship among nature, city and human.