Excerpt: Wish 21 is an architectural project designed by Garoa in Brazil. Guided by the holistic pedagogy, which forms its basis through a complete vision of the individual, the new space aims to house a new proposal from the school that aims to offer a program that focuses on stimulating 21st-century skills.

[Text as submitted by architect] Changes in the way of teaching make it imminent to rethink teaching spaces. With new approaches in which the teacher is no longer the single source of knowledge and teaching is no longer unidirectional, hermetic classrooms with vanishing points converging towards the blackboard no longer make sense. Within this scenario, Wish 21 is a continuation of a previous work carried out by the office, together with the school, which seeks to investigate and speculate catalyzing spaces for new forms of education. Guided by the holistic pedagogy, which forms its basis through a complete vision of the individual, the new space aims to house a new proposal from the school that aims to offer a program that focuses on stimulating 21st-century skills.

The new program aims to explore the individual’s potential, in a self-managed way, through the creation of personalized trails that cover different types of activities. Each one in his interest learns in his own time, and in his own way. It is kept in mind, from the reading of the pedagogical proposal, that the spaces cannot be closed and segregated. Catalyzing spaces that promote positive distractions, encourage exchanges, stimulate autonomous action that reflects the different paths of each student are needed. The intervention is in a pre-existing shed. The actions are guided by demolition and grafting procedures, removing construction excesses, and inserting new structures that enable the creation of flexible spaces capable of housing the various proposed activities.

We approach the floor plans as a territory composed of zones of contraction and expansion, where borders and limits exist, but they are tenuous, allowing and encouraging transgression, catalyzing imaginative appropriation, understanding children as active subjects. Corridors, places where the only function is the continuous movement of coming and going, do not exist. The main spaces are 4, each with its personality: Gym, where activities related to body movement are performed, usually has sweat involved; Studio, where music practices and video recordings take place, usually have noise involved; Maker space, where devices are built, and plastic arts activities are carried out, usually involves the use of tools;

And library, where the most introspective activities occur, possible readings, usually involves the need for silence and isolation. Centralizing all these spaces is the core, a place where you can observe and also enter all the spaces that surround it. It is formed on one side by large panels with sliding doors, all of them with large blackboards that can also be panels for displaying students’ works, while on the other side it is formed by a set of three semi-transparent rolling curtains. When in an activity that requires a larger space, such as lectures and workshops, it is possible to collect such curtains and panels to create a larger space uniting maker space, core, and gym. At the center of the core is a rolled-up projector screen that allows viewing on both sides. The walls that divide the spaces do not reach the ceiling, they have apertures, gaps that allow to see through or hear what happens in the neighboring spaces. In this way, these walls, these lines that somehow divide the spaces, are tenuous. They encourage the contamination of activities that take place between them. Its design conforms spaces that are sometimes wide, sometimes narrow and high.

It is not possible to understand the totality of the space only standing still, its inflections and sinuosities make it necessary to move in order to understand, it demands from the user a certain attention, a certain awareness of the body that becomes a unit of measurement. Regarding natural light, the project is guided by the mapping and enhancement of the existing openings in the construction, motivating the distribution of the program and the design of the internal walls, in order to divide and direct the natural light to each environment. Therefore, the design of the plaster walls has inflections at a half-height that act as light bouncers, they are responsible for sharing the natural light input from a single opening for two rooms. Regarding artificial lighting, the aim is to create a single illuminated ceiling, common to all environments, starting with the creation of an electric tray at 2.10 m high around the entire perimeter of the existing wall.

Divides the space vertically in half. Its height is conveniently defined as a function of the high parapet of the large pre-existing windows and ends up giving the space a smaller scale, closer to the human scale, since to enter the space it is necessary to pass under the electric tray. It is predominantly made by reflectors directed to the ceiling and installed on the sides of the electric tray, emphasizing that the walls do not touch the ceiling. Light invades tangent spaces, creates shadows from the profiles that enter adjacent environments, emphasizes the permeability between spaces. In general, the project seeks to emphasize that the different areas of knowledge interact and grow together, that space does not only have to reflect this interaction but also catalyze possible cooperation between its users. 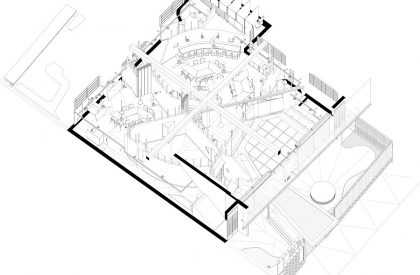 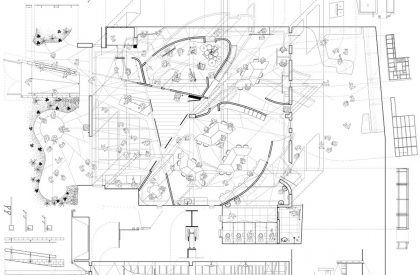 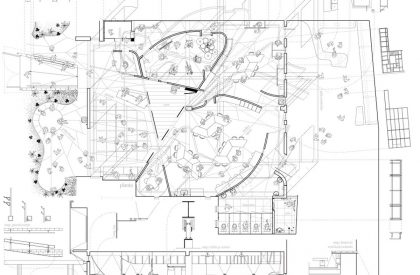 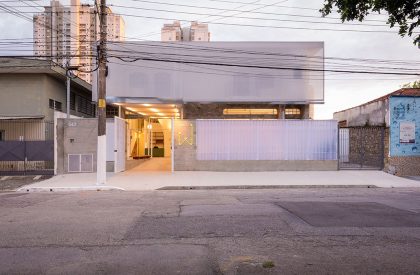 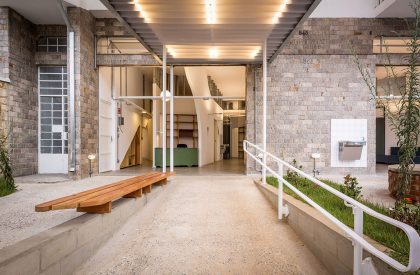 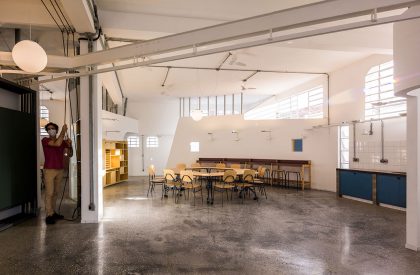 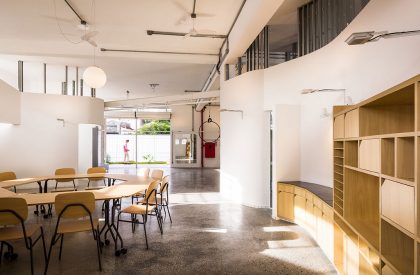 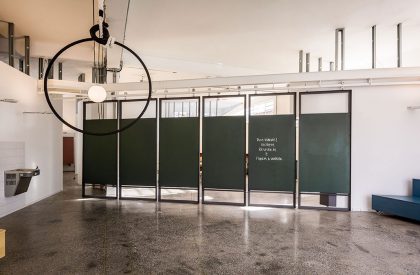 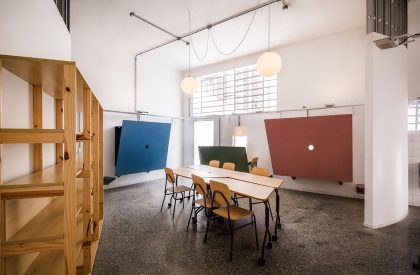 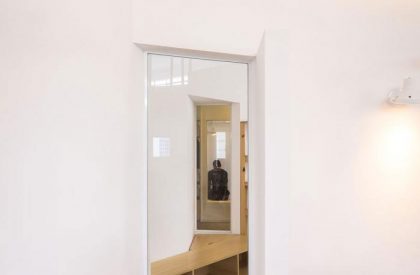 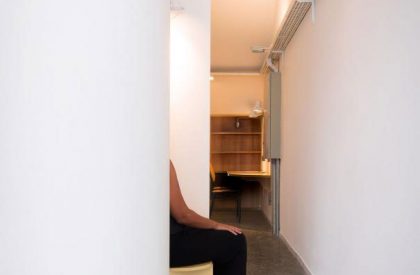 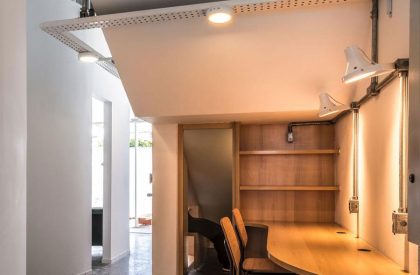 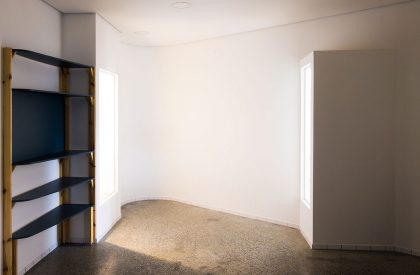 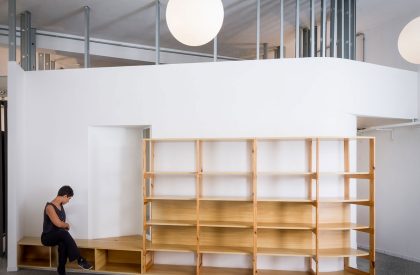 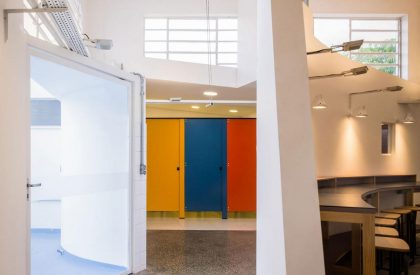 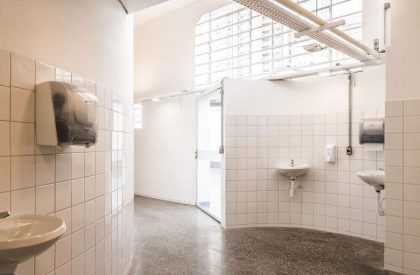 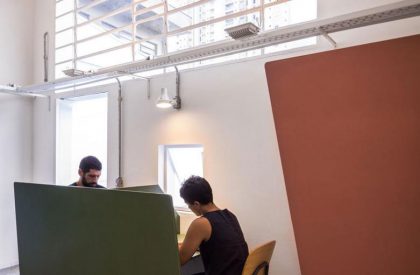 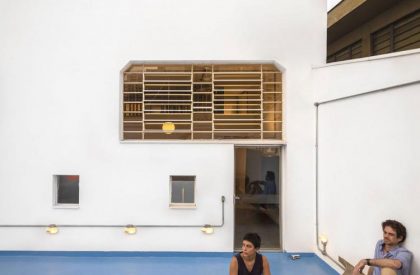 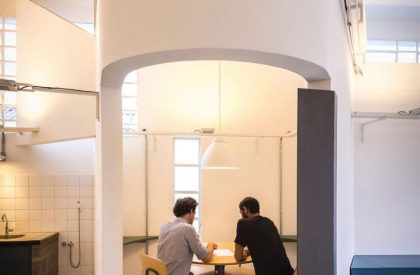 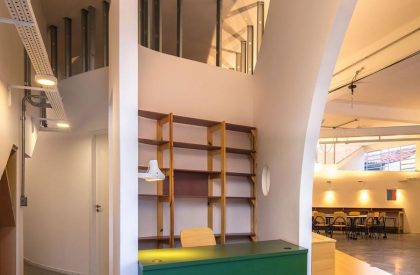 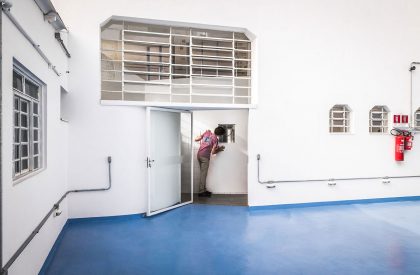 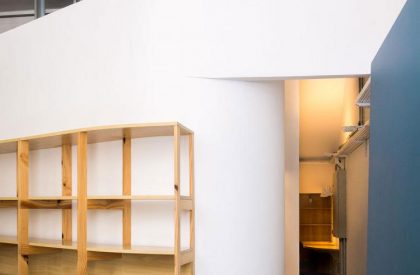 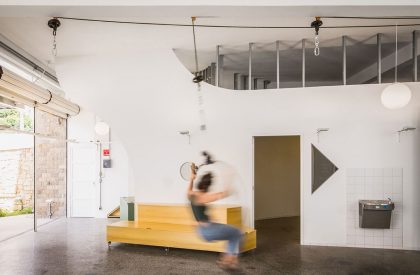 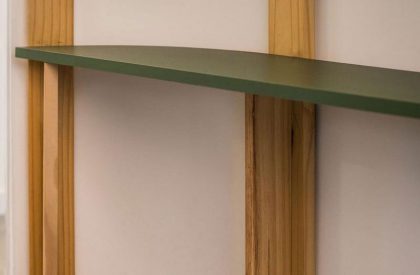